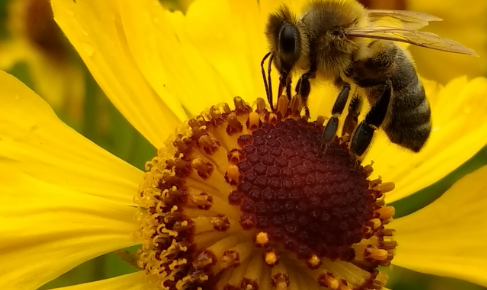 50th Anniversary of the Earth Day and celebrate one of the smallest but most critical organisms. Did you know the bee pollinate two-thirds of our world’s crops and  85 per cent of the world’s flowering plants and vegetables?

Bees are flying insects related to wasps and ants, especially the western honey bee is famous for producing honey and beeswax. Bees are a monophyletic lineage within superfamily Apoidea and are considered a clade called Anthophila.

From Shakespeare to JK Rowling from beehive hair-dos to phrases like “ having a bee in your bonnet” the bee has been a star for centuries  Pliny referred to honey as “ the sweat of the heavens and the saliva of the stars”. Chaucer was one of the first to use the phrase “busy as bees”.

The honey with over 270 species of bee has been recorded in Great Britain. Honey bees and bumblebees live socially, led by a queen and serviced by male drones and female worker bees.

Since 1900, the UK has lost at least 13 species of bee, and further 35 are considered under threat of extinction.

The outlook for bees is quite bleak and their drop in numbers is a sure sign of the plight of the natural world.

There is overwhelming scientific evidence that neonicotinoids, a group of pesticides commonly used in the UK, harm bees. The European Food Safety Authority (EFSA) declared in 2013 that they posed an unacceptable risk to bees leading to temporary restrictions. In April 2018, all countries across the European Union including the UK voted to ban the outdoor use of  3 bee-harming pesticides.

By planting flowers rich in nectar you can really help bees to find the food they need. Bees are crucial in the countryside and they are essential in the city too.

Simple yoga exercise to enhance respiratory system
Cornavirus deaths in UK could be as high as 41, 000