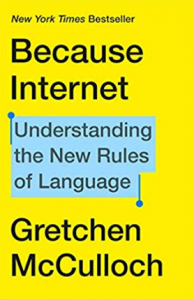 Gretchen McCulloch, a Canadian linguist, making sense of  the ways we communicate online “ how internet is making us  more nuanced and inventive writers”,  in her latest book she writes “ because of internet, through a revolutionary period in linguistic history, where writing quickly, within character limits and deploying ever-changing internet slang, is enriching English. When I see the boundless creativity of internet language flowing past me online, I can’t help  but want to understand how it works”.  Linguistically inventive niche online communities spread slang and jargon exponentially faster than in the days when new dialects were constrained by physical space. What’s more, social media provides a fascinating laboratory for watching language evolve in real time.

McCulloch zooms in on the realm of informal writing and expression which can, co-exit, peacefully with rule-bound formal writing.

The way people write online is determined by their age, so McCulloch splits internet users into distinct groups including a Twitter term “Semi-Internet People”, those who first went online in the late 1990s to early 2000s and “ still consider themselves not really a computer person.

McCulloch explains “lol” is “ in transition”, no longer  a signifier of genuine amusement but instead used to express sarcasm and even passive aggression, as David Cameron learned after the Leveson inquiry revealed  that  he had signed text messages to Rebekah Brooks “LOL” thinking the acronym stood for “lots of love”.

Can internet language be truly “revolutionary” if it is forged on platforms that are owned by tech companies which, like 18th-century authors of dictionaries, have their own agendas.  McClloch embraces of new: If you aren’t say, one of the “two million people who use emoji every single hour, you will be left behind.