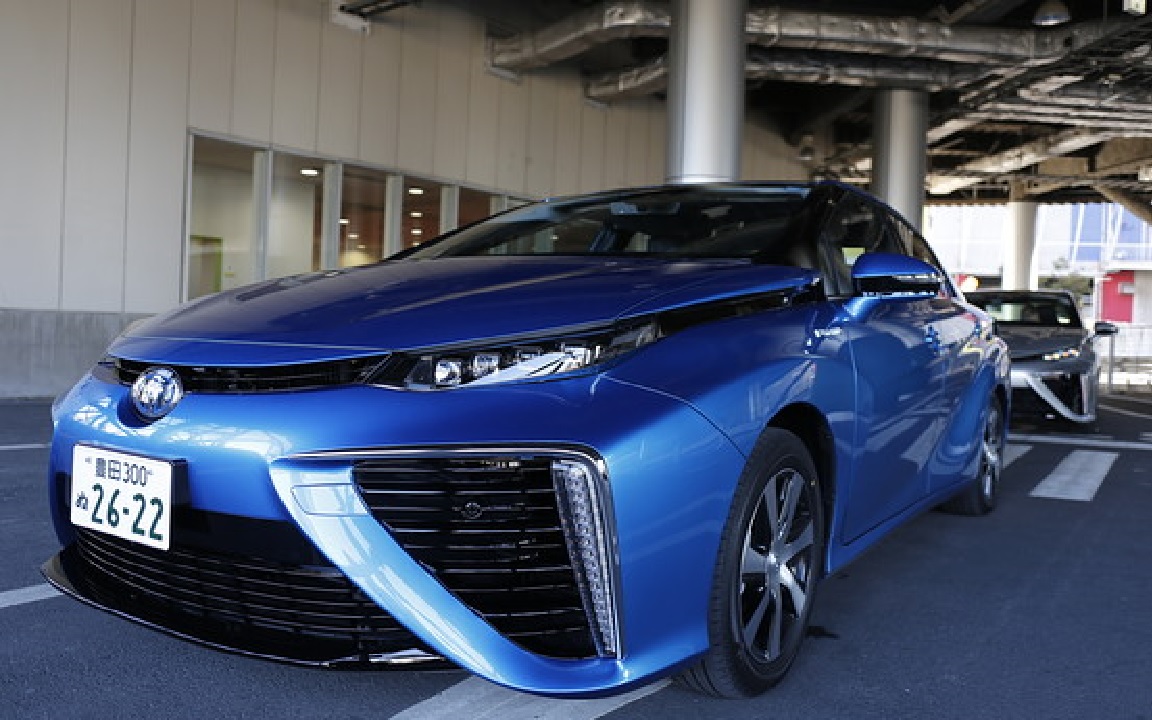 The Future is Mirai – ultimate environmentally friendly car, (Toyota’s new polymer fuel-cell hydrogen-powered eco-car,  looking out to the future decades), which is ready for selling to public in U.S. and Japan in January 2015.

The $62,000 f0ur-door family sedan, Mirai, will deliver air to a polymer fuel-cell to produce hydrogen fuel for the car in the form of droplet of water with a driving range of 300 miles.  Although Mirai is slightly quicker than Prius it is silent without the vibration and sound of combustion engine and can reach 62mph in 9.6 seconds. Hydrogen gets pumped into the fuel tanks made of carbon fibre, and oxygen from the air is sucked into the stack through the front grille to fuel-cell stack. The chemical reaction between the Hydrogen, a catalysts and the oxygen creating enough electricity to power the car. When you depress the accelerator electricity from the fuel-cell stack is send to the Engine. The by product is water which is exists through tail pipe.  Fuel cells, like hybrids and battery-powered electric cars, are powered by electric motors, which uses hydrogen rather than batteries to store the energy. Toyota says it made the Mirai economically viable by wheedling the fuel-cell stack with less expensive materials, reducing the amount of platinum in the catalyst that separates hydrogen protons from electrons (electricity), and standardizing the production equipment to make the car  Although NASA during Apollo missions in the 1960s,  has proved  fuel cells  can generate electricity and produce drinking water in space, when mass market for fuel-cell cars emerges  there won’t a need for big investments in hydrogen fuelling stations.

Akio Toyoda, Toyota Motor’s president and the descendant of the Toyota’s founding family, states “there is a market for both Hydrogen cars and plug-in electrics. Toyota is on course to earn a record $18.2 billion this year—more than the combined projected profits of Ford Motor, General Motors, and

Honda Motors. But Toyoda doesn’t just want to sell cars. He wants to save the planet.

At 58, Toyoda. as the grandson of founder Kiichiro Toyoda, Akio’s elevation to the top job in 2009 was nothing short of the succession to the Toyoda clan. The last family member to run the company, Tatsuro Toyoda, gave up control in 1995 after suffering from stroke.

Despite record profits over the last two years, Toyota faces challenges from China currently the fastest-growing car market in the world. Toyota and other automakers have recalled millions of vehicles last year to address air bag problems at Japanese supplier Takata.

Personal mobility is a necessity and critical for most people. In the populated cities of the world  Mumbai, where 12.5 million people who commutes to work use trains as their primary transport to work, as only 12% uses personal car. Auto manufacturers make note, in both India and China, fastest-growing frontiers of auto industry expansion, is an ecological wasteland could do with Hydrogen polymer fuel cell cars.

According to the International Energy Cars, trucks, and other forms of transportation generate about 22 percent of the world’s greenhouse gas emissions.

Toyota started its fuel-cell development in 1992, roughly the same time it began its work on the Prius gas-electric hybrid engine. The spiralling costs of fuel-cells contributed to technology was not going forward in the  1990s and early 2000s, despite best-selling books such as The Hydrogen Economy by futurist Jeremy Rifkin.

Toyota’s fuel-cell launch is getting a 2.75 million yen ($23,754)  Japanese Government subsidy. In the U.S., Toyota aims to charge $57,500 for the Mirai. Federal and state incentives could reduce the price by $13,000, and Toyota plans to provide free fuel to early buyers. Customers can also lease the car for three years, at $499 a month.

The Mirai’s hydrogen tank can be refilled in less than five minutes via a large hose that pumps cooled hydrogen into the car’s pressurized tanks. In California there are 13 research hydrogen-fuelling stations, 9 public stations, and an additional, newly funded 18station to be operational in the near future.

95 percent of U.S. hydrogen production is made from heating up natural gas, a process that produces greenhouse emissions. Fuel-cell vehicles such as the Mirai, Musk said, are “hydrocarbon-burning cars in disguise, and well-suited to the rocket business as it is highly volatile and can have explosive consequence.” While EVs take hours to recharge, the fuelling cost is a fraction of the roughly $45 a hydrogen fill-up will cost. Consumers should be familiar with the 1937 Hindenburg disaster. However, Toyota engineered its hydrogen tanks with a three-layer structure of carbon-fibre-reinforced plastic and other materials that can withstand not only the usual crash dummy collision tests but also a bullet fired at close range. In the event of a leak, special sensors can shut off the hydrogen flow.

Toyota’s $210 billion market value is greater than that of Ford, GM, Honda, and Nissan combined.