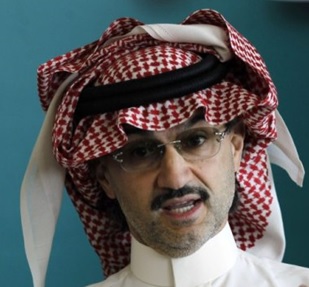 The money would be used to “foster cultural understanding”, “empower women”, and “provide vital disaster relief” and he has been inspired by the Gates Foundation, founded by Melinda and Bill Gates. In 1997.

Mr Gates praised the decision, calling it an “inspiration to all of us working in philanthropy around the world”. The money will go to the prince’s charitable organisation, Alwaleed Philanthropies, to which he has already donated £2.24bn $3.5bn.

The company owns stakes in hotels The Four Seasons, Fairmont and Raffles, as well as News Corp, Citigroup, Twitter and Apple.

“Philanthropy is a personal responsibility, which I embarked upon more than three decades ago and is an essential part of my Islamic faith,” he said.

He said the donation would take place over several years and would be overseen by a board of trustees, which he will head.