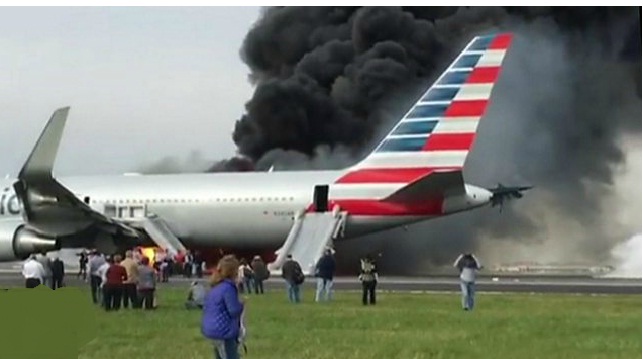 An American Airlines Boeing 767 bound for Miami caught fire  at 14:35 local time (19:35GMT) on the runway of Chicago O’Hare airport while taking off and pilot has to abort the take-off  and evacuated everyone on board as emergency chutes were deployed as black smoke billowed from the plane, injuring twenty people.

Nine crew members and 161 passengers on board had a lucky escape. According to an official involved in the investigation the plane seems to have suffered a rare but serious type of engine failure in which parts break off and are spewed outside the engine. Passengers however, reported an explosion followed by flames and black thick smoke as the plane was speeding down the runway.

According to a female passenger within seven seconds there was smoke in the plane and the fire is right up against the windows which were melting.

American Airlines said passengers who still wanted to continue their travel had been put on another flight to Miami.