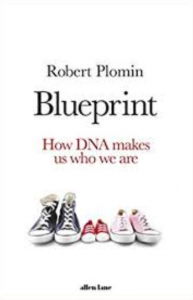 “Genetics is the most important factor shaping who we are”  write Robet Plomin a behavioural geneticist at King’s College London  recognised globally for his research into the genetics of intelligence. “ It explains  more of the psychological differences between us thane everything else put together, the most important environmental factors, such as our families and schools account for less than 5 per cent of the differences between us in our mental health or how well we did at school” he writes. Plomin has been using twin and adoption studies to tease out the relative effects of genes and environment. Identical twins share 100 per cent  of their DNA, in nopn-identical twins this drops to 50 per cent. Adopted children share a home environment, but no DNA, with their adoptive parents, and 50 per cent of their DNA, but no home environment, with each of their biological parents.

Our intellectual capacity, our introversion or extraversion, our vulnerability to mental illness, even whether we are a morning person are profoundly shaped by our inherited DNA differences.

A study of “ heritability” of various characteristics and psychological traits  like body weight reveals  about 70 per cent of differences in weight between people can be attributed to differences in their DNA. Identical twins tend to be more similar than non-identical, fraternal, adopted children are more like their biological parents than their adoptive parents.

Breast cancer, a genetic disease, shows a heritability of only 10 per cent. In contrast, it is 50 per cent for schizophrenia and general intelligence (reasoning) and 60 per cent for school achievement.

Plomin argues DNA insightrs should make us more tolerant of those who might be overweight or prone to depression or  Alzheimer’s disease in their later years. Plomin writes about ongoing genomic revolution that will transform our lives and society and one need no more than the slightest awareness of how genetics has already been misused to be concerned, including the thirst for personal data by Facebook and Google and even potential employers, insurance companies. To think that our society can handle the new world of personal genomics without negative consequences, one has to be an optimist.

Plomin claimed that children with high “polygenic scores” for educational achievement – showing a constellation of genetic variants known to be associate with academic success – gained good GCSE grades regardless of whether they went to selective or non-selective schools.

Environment is subject to  genetic influence “ If kids in book-filled homes exhibit high IQs , it is because high-IQ parents tend to  create book –filled homes. Parents are passing on their intelligence to their children via their genes not  their libraries. Parents matter, but they don’t make a difference. The parents have little systematic effect on their children’s outcomes, beyond the blueprint that their genes provide.

Polmin describes DNA as a “ fortune-teller”, Genetics describes what is – it does not predict what could be”.

Blueprint: How DNA Makes Us Who We Are by Robert Plomin, Allen Lane £20, 288 pages