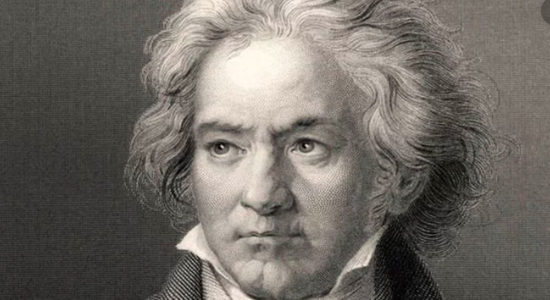 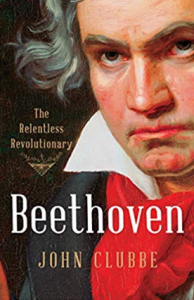 In 1824, Beethoven, at the premiere of his Ninth Symphony the Viennese gave the performance five standing ovations. Only the Austrian emperor ( who  got three) enjoyed this but fearful of subversion, a panicked police commissioner had to shush them into silence.

Last month, the same symphony’s “Ode to Joy” theme drifted from the floor of the European Parliament, newly elected MEP from UK’s Brexit party turned their backs in defiance, apparently disgusted by an “ anthem” that celebrates togetherness and tolerance.  Brexit enthusiasts in Gloucester threatened to boycott the Three Choirs Festival for programming the Ninth – a work dominated by Eurofederalism.

Beethoven’s music has always influenced politics as John Clubbe claims Beethoven was  “ a true heir of the French Revolution”.

This biography of Beethoven the composer as political activist, and join him on his journey to Vienna in 1792, where he claims to contract the “ fever of revolution” and see him gesturing towards liberty Trees  – potent symbols of the revolution in official portraits and later in life moulding his lifelong  love of Friedrich Schiller’s “Ode” to freedom into his Ninth Symphony.

At the age of twenty-one, Beethoven moved  to  Vienna to sudy with Hayden, gaining renown as a master pianist and innovative composer. In the capital of Hapsburg Empire authorities were watchful to curtail and punish displays of radical political views. Despite that Beethoven followed the rise of Napoleon and his republican reforms as Napoleon had liberated Europe from aristocratic oppression, Beethoven desired to liberate music and mankind.

How is the Third ( The Eroica) Symphony an  revolutionary symphony if it was written with Napoleon in mind, a leader who notoriously took power in 1799 by declaring “ the revolution is finished”?