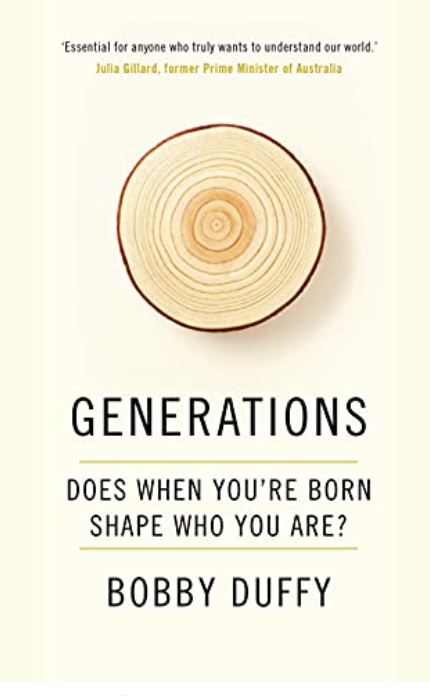 Professor Bobby Duffy’s compelling book, reveals our preconceptions are just tired stereotypes by expressing when we’re born determines our attitudes to money, sex, religion, politics, and much else, informed by unique analysis of hundreds of studies.

Duffy, formerly of polling company Ipsos Mori, now director of The Policy of Institute at King’s College, London, concludes the generations attitudes are not that far apart, although the financial gulf is substantial,  entangles three influences shaping our attitudes, providing a framework for understanding the most divisive issues raging today from culture wars to climate change and mental health to housing including data from all over the globe, and with powerful implications for humanity’s future.

The past decade has seen a growing recognition of a new divide in politics and society- focusing on age not class. Big social media trends can change all of us over a period regardless of our age, as we can change our own life cycle as we go through formative experiences, like having children.

According to Duffy, younger generations start smoking later, but do not give up the habit that quickly, so the life cycle effect is less evident, as they leave home and adopt adult responsibilities later. The British state is being reshaped to focus on older people with the NHS, social care and pensions “triple-lock” which guarantees retirees a minimum rise in income- given priority. The younger people want granny to be looked after.

In the US, Medicare and social security remain untouchable.But the reality is a growing economic gap between the generations.

The surge in asset value over the past two decades, has massively benefited  the post 1945 baby boomer generation who own the housing and have the generous company pension schemes. In UK the value of our assets, our housing and pension wealth, used to stand about three times our national income, although in the past 3 decades it shot up to seven times. So acquiring an asset such as a house or a decently funded pension from earnings is much harder for the younger generation, while the older generations might be sitting on substantial wealth even if they had modest incomes.

Boomers can refuse to recognise how fortunate they have been and attribute their wealth to personal merit. But that house they bought 30 or 40 years ago has not shot up in value just because they saved up to build a conservatory, right planning rules and easy credit helped as well.

Dependence has kept children more closely in touch with their parents much longer.

The decline of young people’s propensity to vote matched the growth of private rented accommodation, which has the most mobility and where voter registration is hardest.

The children remain dependent on their parents for much longer, as they live with them into their late twenties and beyond, as the bank of mum and dad is one of our largest mortgage lenders. It is unwise to row with your banker. This dependence has kept children more closely in touch with their parents much longer.

One reason social media have become so important is that they enable young people to live a different, autonomous social life even if they are cooped up in a bedroom in their parent’s house. Duffy argues using social media is not as damaging as we fear – he points out that lower well-being is almost as strongly associated with eating potatoes regularly as use of social media.

This dependence on parents is affecting our economic performance. Britain is less mobile than it was. Young people move jobs less because family ties are stronger, when parents have all the money are power. So the loan from the bank of mum and dad come with the exception their child continues to live in the area with the promise of help with child care early on, but social care in return later.

An American Bumper sticker says it all, “Be nice to your kids- they choose your nursing home”

Duffy give us hope that older people could respond to an appeal to do something on behalf of their children and grandchildren because they have more in common and care about them more than the pessimists may fear.

People aged 70 are now more likely to vote Conservative than Labour, where as young people are more than twice as likely to vote Labour. In America, other divisions of race and ideology are so strong that age is less important for voting  but religion matters, and religious commitment is clearly declining of successive generations.

Generations: Does When You’re Born Shape Who You are? By Bobby Duffy, Atlantic Books £20/ Basic Books $30, 226 Pages.