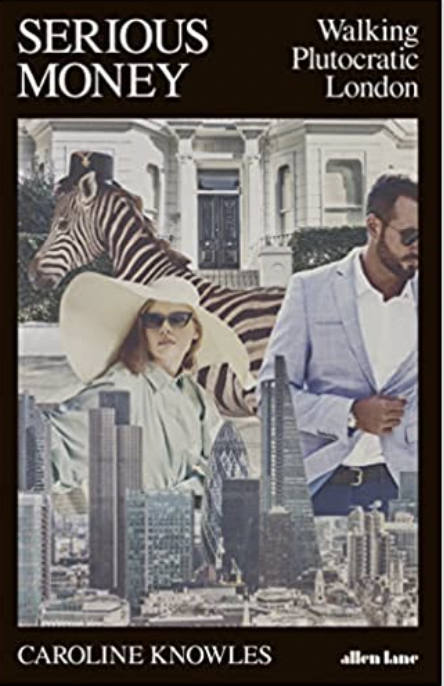 Caroline Knowles delves into London’s plutocrat’s paradise with more resident billionaires than New York, Hong Kong, or Moscow. Far from trickling down, their wealth is burning up the environment and swallowing up the city.

Knowles walks the streets of London from the City to suburban Surrey Via Kensington, Notting Hill, Mayfair, and elsewhere. Her walks reveal how the wealthy shape the capital in their image, creating a new world of gated communities and luxury developments. The dark heart of the plutocratic city, from multi-million-pound mansions to high-end hotels and gentleman’s clubs. Along the way, we meet a wide and wickedly entertaining cast of millionaires, billionaires and those who serve them, bankers, aristocrats, tech tycoons, Conservative Party donors, butlers, bodyguards, divorce lawyers, and many, many more.

After the collapse of communism and the advance of market liberalisation and the rise of globalisation, London entered a race with New York for the title of the financial capital of the World.

London is richer, more Populus, more cosmopolitan, but also more corrupt and one of the most unequal unforgiving cities on the planet.

One great difference between then and now is the people the unimaginable sums of money possessed by the people who now inhabit those streets.

“In one basement, raw sewage runs through a neighbor’s flat” Knowles reports. The absence of light and ventilation means that nobody actually lives in the basements. Instead, they are reserved for home cinemas, swimming pools, gyms, and garages.

One old resident bemoans the arrival of the Gazillionaires and spends much of his time fighting to block planning permission for these architectural tumors. The money that funded the original construction of these magnificent Victorian houses derived from the bloody legacy of colonialism. In the 1960s the scrupulously polite lawyers, doctors, translators, and the occasional celebrity who graced those streets benefited, from a long tradition of plutocratic wealth.

Today’s super-rich has taken the pursuit of wealth to unprecedented levels.

Knowles begins her plutocracy in London’s financial district in order to have a closer look at the engine house behind much of the city’s wealth. Her models include Virginia Woolf walking around London’s wintry streets, Walter Benjamin in Paris, Raja Shehadeh’s exploration of the Palestinian territories, and Iain Sinclair’s London walks. Knowles also tries to investigate the opaque networks of tax evasion, money laundering and rent-seekers. Knowles reveals the quotidian culture of plutocracy and names them by archetype: Butler, Soviet, Banker, bags ( as in Prada), Sturgeon, Blazer, and many more. The further we enter the world of the plutocrat, the seedier, more alienated, and more moribund it becomes. Parts of Mayfair and Belgravia go dark at night because the vast houses are not lived in. They are either an investment boasting solid returns or like the Middle Easterner’s art gallery, they project the image of wealth and prestige. The pocket of light in Mayfair advertises exclusive night clubs where hideously rich men in their forties and fifties pay £10, 000 a night to reserve a prominent table. The mega-rich even buy people, with entourages to do everything from folding trousers to sweeping hotel rooms for listening devices.

“Promoters roam the nearby streets and the internet offering girls the chance to party for free. Young women live on the ambiguous, slippery edge of the night, part guests and part offering. They must navigate the sliding scale between, at the end, accepting expensive drinks and providing conversation, and at the other, escort services, causal sex or even upmarket prostitution duties for rich men” Knowles adds.

The mega-wealthy have the wherewithal to purchase people.

But it is difficult to feel sorry for them as the influence of the global oligarchy of capitalism bears profound responsibility for the dreadful mess we find ourselves in.