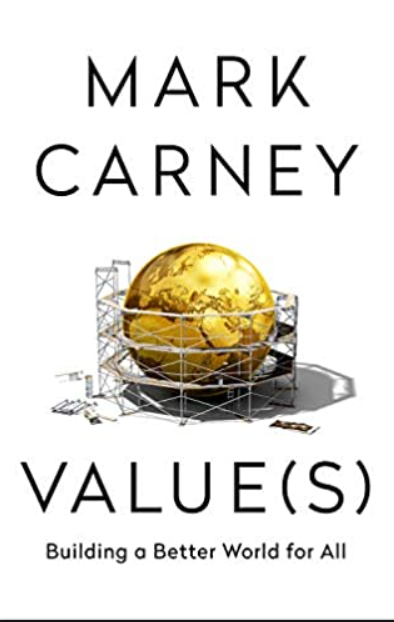 The former Bank governor and now the UN special envoy for climate finance, Mark Carney focuses on the global financial system and corporate governance, along with climate change.

Carney’s detailed account of money and finance, where we get tantalising glimpses of life as a central banker – gilt chairs at a G20 summit in Riyadh in early 2020 as those gathered grappled with the realisation that they were facing major pandemic, weekend phone calls with the first hint of financial markets seizing up in 2008. The book begins with the history economic thought on the theory of value and money, where Carney aligns himself with authors admired by the economic community, like Branko Milanovic, a scholar of inequality influenced by Marxism, and Hyman Minsky, the late US economist known for his theory of cyclical financial instability in capitalism, and the possible implications of cryptocurrencies and stable coins, suggesting that central banks might think about issuing their own digital currencies as a stable future-proof form of money.

The book deals with the financial crisis and the subsequent efforts to create a safer and fairer financial system. He argues that post-2008 reforms have successfully made the system more stable, with constant vigilance.

The book deals with recovery from the Covid-19 crisis, with deep inequalities and climate change. “ The revealed values of citizens in the midst of the Covid pandemic have been those of solidarity, fairness, and responsibility of distribution.” Carney writes.

If the government fails to deal with inequalities, it hint, the legitimacy of the state will be undermined.

Carney’s book is the opposite of Margaret Thatcher’s notorious claim that “ There is no such thing as society”, on the contrary, each of us is nothing without society. This year of enforced isolation has driven home the failures of individualism and offers a persuasive diagnosis of the present social malaise and offers plenty of suggestions about what policymakers could do.

During the 2015, UK General election campaign, financiers were ruefully certain they would face tax rises from a Labour-Liberal coalition but a Conservative government won an outright majority, and the austerity policy of George Osborne, Chancellor of the Ex-chequer, ushered in even greater inequalities.

Growing inequality in income and opportunity, systemic racism, health and economic crises from a  global pandemic, mistrust of experts, the existential threat of climate change, deep threats of employment in a digital economy with robotics and AI on the rise as Carney draws on the turmoil of the past decade and reveals how market economies’ have evolved into market societies where price determines the value of everything in his profoundly important new book, Carney argues that radical, fundamental change is required if we are to build an economy and society based no on market values but on human values.