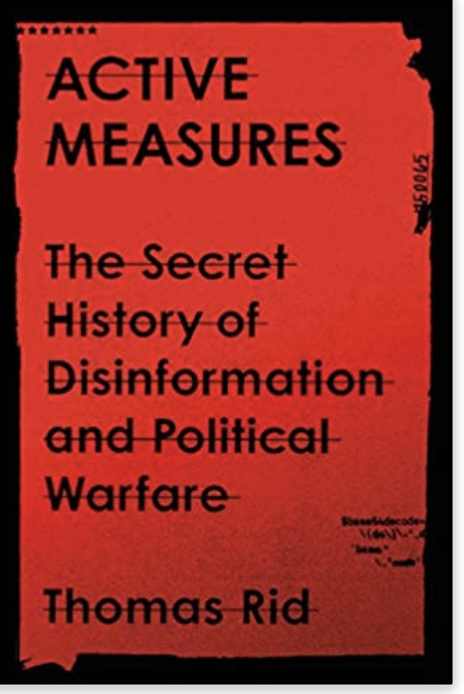 Thomas Rid,  a German  born political scientist who is now professor at the John Hopkins, a renowned expert on technology and national security traces the revelatory and dramatic history of misinformation, reveals the rise of secret deception operations from the interwar period to contemporary internet troll farms.

“We live in a age of disinformation – of organised deception” writes Rid, as the UK government accused Moscow of seeking to interfere in the 2019 election by “amplifying” classified leaked documents.

A long supressed report by Parliament’s Intelligence watchdog recently  accused the British government of “badly underestimating” the degree of Russian influence operations in the UK. The upcoming US election is the reminder of the dramatic Kremlin-backed hack into the Democratic National Committee that sent the 2016 election campaign into turmoil.

More than four months before the 2016 US election, he warned that Russian military intelligence was “carefully planning and timing a high-stakes political campaign to disrupt the democratic process.

The story of modern disinformation begins with the post-Russian Revolution clash between communism and capitalism, which would come to define the Cold War.  In Active Measures, Rid divulges startling intelligence and security secrets from materials written in more than ten languages across several nations, and from interviews  with current and former operatives. He exposes the disturbing history of professional, organised lying, revealing  for the first time some of the century’s most significant operations- many of them nearly beyond belief. A white Russian ploy backfires and brings down a New York Police Commissioner, a KGB-engineered, anti-semitic, hate campaign creeps back across the Iron Curtain, the CIA hacks a fake publishing empire, run by former Wehrnacht U-boat commander, that produces Germany’s best jazz magazine. Rid also traces the rise of leaking and shows how spies began to exploit emerging internet culture many years before WikiLeaks. He also sheds new light on the 2016 election, especially the role of the infamous “Troll Farm” in St. Petersburg as well as much more harmful attack that unfolded in the shadows.

He tracks the root of the Bolshevik revolution  of the 1920s, the Soviet conspiracies about the origin of Aids epidemic, and the nerdy intricacies of digital hacking.

Spy agencies pour resources into hacking, leaking and forging data, often with the goal of weakening the very foundation of liberal democracy: Trust in facts.

New fissures in the society caused by globalisation, rising nationalism and events such as Brexit  and Coronavirus have left populations fractured and more open to discord.

Rid  appeared as an expert witness to the US Senate’s Intelligence committee on the DNC hack  ahead of the 2016 election. His forensic account of that operation recounts investigative breakthroughs such as direct conversations with the perpetrators about whether they had handed, hacked DNC emails to WikiLeak. “Yeah Man” come to the laconic reply  via Twitter direct messages from the GRU ( Russian Military Intelligence) officer posing as a hacker called Guccifer 2.0, “ I sent  them mails”.

He also charts the earlier history of misinformation operations that the real character of political warfare comes alive, as Rid exposes the exploits of intelligence officers who spotted opportunities to engineer divisions and took the initiative, including falsehoods and forging documents to leaking truths which were sensitive in order to destabilise opposing regimes.

Operation Neptun, masterminded in the 1960s by Ladislav Bittman, a cold war spy for by Czechoslovakia tasked with stirring up anti-German sentiment in the West.

Rid derides journalists as hapless proliferators of suspect material, keeping the disinformation racket in business by embracing anonymous leaks “without spending too much time on checking their provenance or veracity. He is also scathing of  whistle blowers such as Edward Snowden, taking the intelligence establishment’s view that the leak of NSA files was a gift to the West’s adversaries

Taylor Swift donates £23, 000 to a London student in UK
Power loss compounded by problems of succession