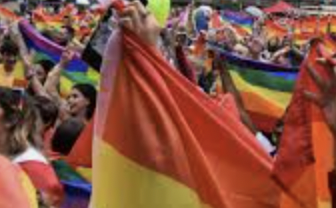 More than a million people took part in the 50th anniversary of the UK’s first Pride Parade in London. Revelers clad in face paint, glitter, jewels, and sequins joined the celebrations, and paid homage to the original 1972 march, organised by the Gay Liberation Front. Floats passed through Park Lane and then onto march through  Trafalgar Square with people dancing in the capital streets, throwing sweets, blowing whistles, and essentially had a great time.

Thousands thronged the capital for Pride in London, as over 600 LGBTQ community groups marched the UK’s first-ever Pride parade. The parade started around midday from Hyde Park Corner and runs until 6pm finishing at Whitehall Palace. The event is named the “biggest and most inclusive event in history” with performances from  Ava Max, Emeli Sande, and Samantha Mumba and is also attended by the cast of the Netflix series Heartstopper.

London’s Mayor Sadiq Khan says today’s Pride in London is a march for “love and an open, inclusive, accepting world”.