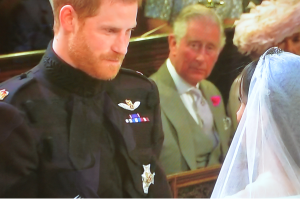 Prince Harry, Meghan and Prince Charles in the middle

Harry (33)  and Meghan exchange vows as the couple are declared husband and wife before the Queen and 600 guests at St George’s Chapel, Windsor, the spiritual home of the Most Noble Order of the Garter, the senior order of British Chivalry since 1348.

Members of the Royal family including Prince Charles and Doria Ragland Meghan’s mother entered at the Galilee Porch at the rear of the chapel. Harry with his best man Prince William walked from the castle and entered via the West steps. Meghan arrived in one of the Queen’s cars joined by page boys and bridesmaids on the West Steps.

The royal couple will be known as the Duke and Duchess of Sussex.