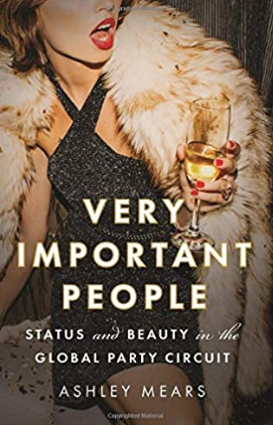 Associate sociology professor and former model, Ashley Mears’s entertaining study of the elite nightclub scene revealing the truth behind nightclubs from New York to Miami and the Riviera.

Mears reveals how beautiful young women are used to boost the status of men million-dollar birthday parties, megayachts on the French Riviera.

She conducted an ethnographic study of the clubs at which six-liter bottles of Cristal Champagne are brought to tables at $40, 000 each.

She asked   Dominican Thibault, a 45-year-old who made a living as a New York nightclub promoter, whether she could observe him at work to which replied “ I’d love to shake it with a professor”.   She noted “ I dressed like a girl and went out with promoters at night, thus using bodily capital to manoeuvre the access problem known in ethnography as “studying up”.

In Very Important people, Mears’ record of her nightclub experiences and her intimate observations of displays of extravagance at the elite nightclubs often frequented by models and wealthy men, is rich entertainment.

“The models and bottles” club was pioneered in New York by Marquee, a 10th Avenue club that opened in2003 and was grossing $15m a year by 2007. The money obviously came from the super-wealthy what one club owner coined the phrase the “lettuce” in the club salad. He meant “ affluent tourists and businessmen – banker, tech developer, or other upper class professional.

Ordinary clubbers paid entry, but the big chunk of money came from tables reserved in advance near the DJ for big spenders and for promoters accompanied by 10 or 15 girls. These women often passers-by recruited off the streets by promoters with the lure of free dinner and a night out, were almost all white and universally tall,  slim, young between 16 and 25.

The point was to make a show-off by paying over the odds for champagne, often brought to tables in sparkler-illuminated bottle trains.

Brokers who earn a living by cajoling aspiring models to accompany them to nightclubs, look pretty and dance.

Girls function as a form of capital and their beauty generates enormous symbolic and economic resources for the men in their presence, but capital is worth far more to men than to the girls who embody it” Mears writes.

In short, they were unpaid and encouraged by their flirtatious promoters to treat it all as fun. Often new to the city, dancing for their supper felt, like a good deal. The promoters did far better –getting fees from the clubs of several thousand dollars a night and kickbacks from champagne sales but made far less from the hustle than the club owners.

Mears notes, observers of today’s gilded age have focused on the alchemy of turning money into cultural capital through education and collecting art, but simply throwing it around is not dead yet.