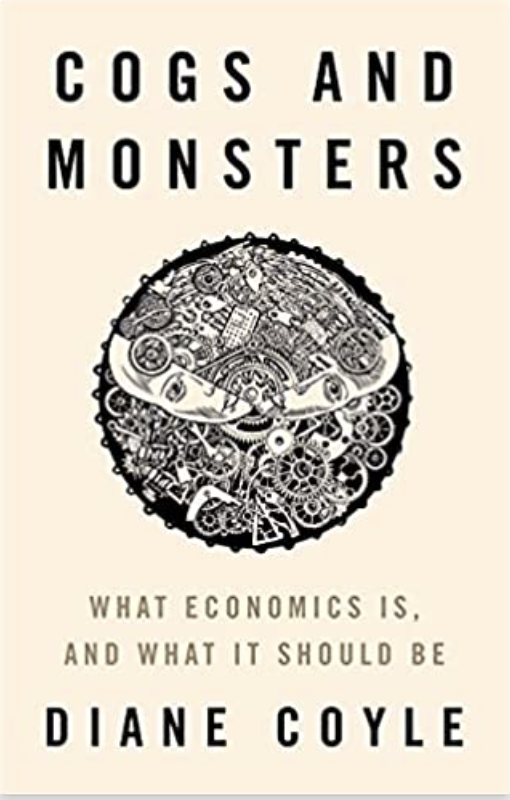 Diane Coyle, distinguished academic economist with Harvard PhD, Cambridge Chair, and professional, ex-UK Treasury, CBE, explores enormous problems but also opportunities and explains how economics needs to change to keep pace with the twenty-first century and the digital economy – Digital technology, big data, big tech, machine learning, and AI are revolutionising both the tools of economics and the phenomena it seeks to measure, understand, and shape.

These dizzying changes are essential for policymakers to solve the world’s crises, from pandemic recovery and inequality to slow growth and the climate emergency.

Coyle says, still assumes people are “cogs” – self-interested, calculating, independent agents interacting in defined contexts. But digital economy is characterised by monsters – untethered, snowballing, and socially influenced unknowns. Bu treating people as cogs, economics is creating its own monsters, leaving itself without the tools to understand the new problems it faces. Coyle rightly asks whether economic individualism is still valid in the digital economy, whether we need to measure growth and progress in new way, and whether economics can ever be objective, since it influences what it analyses. The discipline needs to correct its striking lack of diversity and inclusion if it is to be ab le to offer new solutions to new problems.

Cogs and Monsters offers a road map for how economics can adapt to the rewiring of society, including by digital technologies, and realise its potential to play a hugely positive role in the twenty-first century.

In Cogs and Monsters Coyle dismisses macroeconomics as a lost cause, and so focuses almost entirely on micro economics – the analysis of individual and company level behaviour. Doyle’s criticism of modern micro economics as preoccupied with an inappropriate conception of human beings as mechanical and individualistic – as discrete as cogs in a social machine, and of misplaced confidence in the separability of positive and normative analysis.

Doyle also highlights a vision of a reformed discipline able to successfully guide public policy in the increasingly digital economy of the 21st century- one in which phenomena such as “network externalities” and increasing returns are not the rare and exceptional “monsters” they appear as in today’s economic models, but the default assumptions on which tomorrow’s theories are built.

Policymaking during the coronavirus crisis, the first, the “cogs”, is especially thought-provoking, when trying to direct social behaviour, policy interventions, that do not properly account for the innate ability of human beings to understand, adapt to and ultimately also to game those interventions are doomed to failure.

Exploitation is inherent “ a value system that revolves around men and their desire”
Hong Kong: Freedom under Communist regime