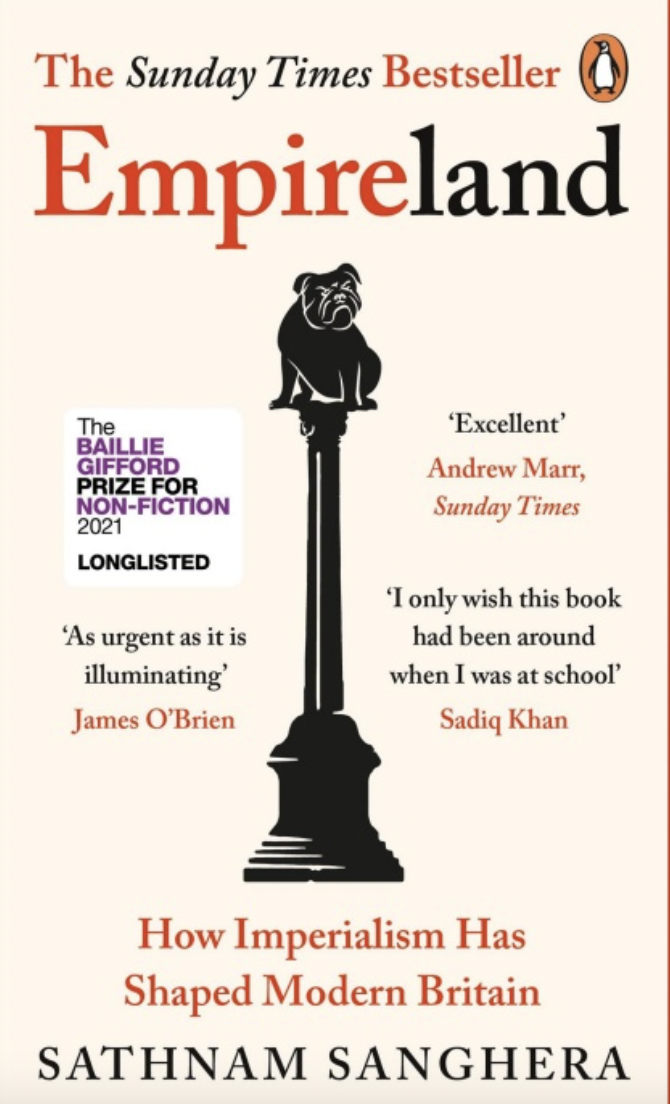 The British Empire remains a subject of both shame and glorification, subject of public controversy Sathnam Sanghera, addresses many of the issues that are now urgent subjects of debate- such as Britain’s role in the slave trade and the links between empire and multiculturalism.

Sanghera shows how our imperial past is everywhere including how we live and think, a challenges everybody’s view of the British Empire and its legacy today.

Sanghera’s journey of discovery as a black country Sikh like the rest of the country has been taught very little or nothing at all about what happed in the Empire. Empireland challenges some of the nostalgia that has festered around the empire, when a quarter of the world’s map was covered in pink of our empire. Sanghera born in 1969,  has no rose tinted glasses towards an empire and neither do many people alive in Britain today. This can be seen in the Brexit vote with the desire to head back to a time of nostalgia of the 1950s and 1960s. Sanghera reveals how imperialism shaped modern Britain. With the recent acts of statues being torn down or defended, concert halls and schools being renamed or companies apologising for past actions as Sanghera puts it “ the effect of British Empire upon this country is poorly understood.” Explaining how his view was framed by the history of colonialism and that the white imperialists were the guiding lights and protectors of the dark “natives” , the idea of equality was a calamity for  Enoch Powell.

We are reminded that for a long time, 1660 to 1807, Britain profiteered from the evils of slavery by shipping around 3 million Africans to America. It was during the late nineteenth and early twentieth century that the Prime Minister called imperialism and empire “ the vulgar and bastard imperialism of irritation and provocation and aggression … of grabbing everything even if we have no use for it ourselves.”

In the imagination of the modern imperialist, the empire was a good thing, there are only two states: Dominant and submissive, coloniser and the colonised. If England is not an imperial power, it must be the only other thing it can be: a colony. Those who campaigned to leave the EU described our past and future relationship with the EU in colonial terms. Dominic Raab who clearly did not understand that British free trade in the nineteenth century was accompanied with a Royal Navy gunboat, and canon to fire our way to “free trade”, said Britain would be able to resume its historic role as buccaneering free trader.

Clive o India is blamed for the Great Bengal Famine of 1770 estimated to have killed 10 million people. Clive received one of the largest windfalls in history which today was equivalent to £702 million. When William Dalrymple describes Clive as an “unstable sociopath” it seems rather restrained. Clive was widely loathed during his lifetime, Samuel Johnson stated that Clive had “acquired his fortune by such crimes that his consciousness of them impelled him to cut his own throat”. When Clive committed suicide in 1774 he was place in an unmarked grave.

We have not invaded since 1066, that we have never had to revaluate our actions and our history, if we did we may understand why some countries in the world see us as the bogeyman, Iran, Iraq soon springs to mind.

At a time of great division when we are arguing about what it means to be British, Empireland is a groundbreaking revelation and enlightening portrait of contemporary British society, shining a light on everything that usually gets left unsaid. In Empireland, a former Financial Times writer shines the brightest light into some of the darkest and most misunderstood corners of our shared history. The British Empire ran for centuries and covered vast swathes of the world and fundamental to understanding Britain. However, there seems among those who celebrate the empire, not to include the subject in our school history books, not to emphasise it too much in our favourite museums.

At a time of great division, when we are arguing about what it means to be British, Sanghera’ s Empireland urges us to address this bewildering contradiction.  Only by seeing where we really come from, that we can begin to understand who we are, and what unites us.

Britain, is actually rooted in our imperial past. Sanghera without watering down the facts, clearly shows acerbic wit, how our past is everywhere: from how we live to how we think, from the foundation of NHS to the nature of our racism, from our distrust of intellectuals in public life to the exceptionalism that imbued the campaign for Brexit and the government’s early response to the Covid crisis. Yet Empire is subject  weirdly hidden from view.