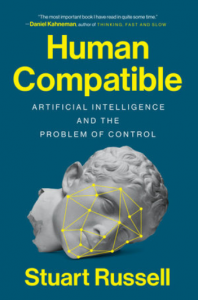 Alarms already sounded by Bill Gates, late Stephen Hawking and Elon Musk,  about artificial intelligence and how one day super-intelligent robots  will one day wipe out or enslave humanity. Superhuman artificial intelligence is an approaching tidal wave that threatens not just human relationships and jobs but civilisation itself. Conflict between humans and machines is seen as inevitable as its outcome all too predictable.

Consider what happens when AI, which we built will be far smarter than us, and  makes all crucial decisions for us, after they master all branches of knowledge- including how to enhance their own intelligence. This would apply to our physical needs, so why wouldn’t we sit back and indulge ourselves?

However, we can never see far enough ahead to tell if our “rational” actions are the right ones to achieve our desires.

We may survive our own most powerful creations but end up the equivalent of wildlife in a safari park, overseen by benign intelligence whose own goals we could never hope to comprehend.

Professor of computer science at the University of California, Berkeley, Stuart Russell’s Human Compatible, is a must book to read and makes you think about the past, present and future of AI and reveals the realities pf the technology and its several limitations and makes the path to super-intelligence seem all too real.

Human Compatible is also gives an answer in Ai circles as “the control problem”, how to ensure AI always remains under human guidance and working for human benefit.

The problem of keeping control of artificial intelligence according to Stuart Russel, lies in the way we build all our machines, which are optimised for a given purpose, which  is built or programmed in from the start. This is fine as long as the machines’ powers are limited. But when they reach superhuman levels of intelligence  they will be able to work out for themselves how to achieve  their ends and we may not just like the results.

Russell’s solution is that we must never give the machine a firm goal, but force them instead to constantly search to understand our preferences, adjusting their goal along the way.

We cannot really see far enough ahead to tell if our supposedly rational actions are the right ones to achieve our desires and problem lies in us not in the machines.

Russell is an optimist and shaping our ultimate technology will mean drawing on psychology, economic, political theory and moral philosophy.

He also explains how a super-intelligent machine balance the self-interests of its owner against an altruistic regard for humanity at large?

Russell’s insistence on making the technology subservient to the human at all times may sound obvious but it is a guiding philosophy that biggest tech company seem, all too often, to have forgotten.

Our descendants may end up surrendering their autonomy to the machines, rendering them happy but no longer in control of their own destiny.

According to Russell “a cultural movement to reshape our ideals and preferences towards autonomy, agency, and ability and away from self-indulgence and dependency”. This will only come about with “human preference engineering on a global scale along with radical changes in how our society works.” Our most brilliant creations will one day have to save us from ourselves.