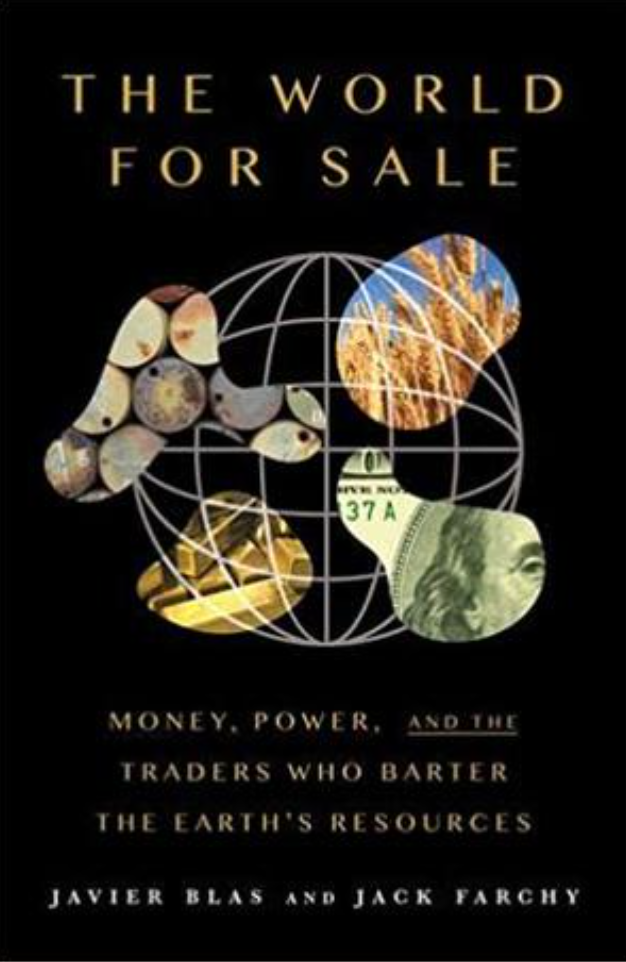 In The World for Sale: Money, Power and the Traders who Barter the Earth’s Resources by  the Bloomberg News reporter and former FT journalist, Javier Blas and  Jack Farchy tow leading journalists lift the lid off one of the least scrutinised corners of the economy including the working of the billionaire commodity traders who buy, hoard, and sell the earth’s resources.

Swashbuckling businessmen became indispensable cogs in the global markets enabling an enormous expansion in international trade, and connecting resource-rich countries no matter how corrupt or war-torn  with the worlds financial centres.

Some traders acquired untold political power, right under the noses of Western regulators, politician -helping Saddam Hussein to sell his oil, fuelling the Libyan rebel army during the Arab Spring, and funnelling cash  to Vladimir Putin’s Kremlin despite strict sanctions.

Commodities trade ripping through the markets, a $1.9 tn stimulus bill steaming through the US Congress and “ Dr Copper” bursting through $9, 000 a tonne to prices not seen since the early days of 2011.

The Bank was on a mission to convince its clients that the good old days were not coming back: Privatisation and reform were the only way forward. We would pull out a chart of the real-terms price of oil over the previous nine decades. The boom times of the past two decades were a historical aberration “ Oil at $10 a barrel was here to say”. But in December 1998, the oil price bounced, and then more than doubled in the next 12 months, it was only just getting started.  The 2000s witnessed the super-cycle with the oil price topping out at $145 a barrel in July 2008.

Four epoch-making trends  drove the development of the commodity trading business from the 1970s on. Nationalisations swept the oil industry in the Middle East in the 1970s. The second was the disintegration of the  Soviet Union in the 1990s.  The two revolutions destroyed the vertically integrated supply chains through which huge shares of the world’s commodities had previously reached their markets.

In the early 2000s two further seismic changes the phenomenal growth of China, and the explosion of deregulated cross-border capital flows.

The commodity traders  had virtually insatiable market into which to sell them and apparently unlimited credit with which to finance it all. Cargill, Vitol and Glencore the world’s largest grains, oil, and metals traders respectively  threw off profits  of more than $76bn over the decade to 2011, which was 10 times the trio had made in the 1990s, more than  Apple and Coca-Cola.

In 2006, Trafigura was implicated in an environmental catastrophe in the port of Abidjan in Ivory Coast. By 2016, Glencore stood accused of plunging an entire country, Chad, into sovereign debt crisis through a large cash-for-crude loan that became burdensome after an oil price crash.

Ian Taylor, CEO of Vitol making corkscrew turns into Benghazi airport in his private jet in 2011, so he can dodge hostile missiles and strike a deal to supply the rebel forces with oil in the middle of the Libyan civil war.

Nikolai Belousov, an ingenious Soviet bureaucrat who managed to buy up 30 per cent o the 1972 US wheat harvest at the height of the cold war in what became billed as “ The Great Grain Robbery”.

China’s record breaking growth means that it has outgrown its dependence on foreign intermediaries. The capital markets `became vulnerable to trading houses with the transparency required by stock exchange listings or banking regulation, and content with climate change.

The World for Sale: Money, Power and the Traders who Barter the Earth’s Resources by Javier Blas and  Jack Farchy, Random House Business £20, 416 pages.

India win the Test match by an innings and 25 runs, and series 3-1
The Powerful world free from foreign constraint