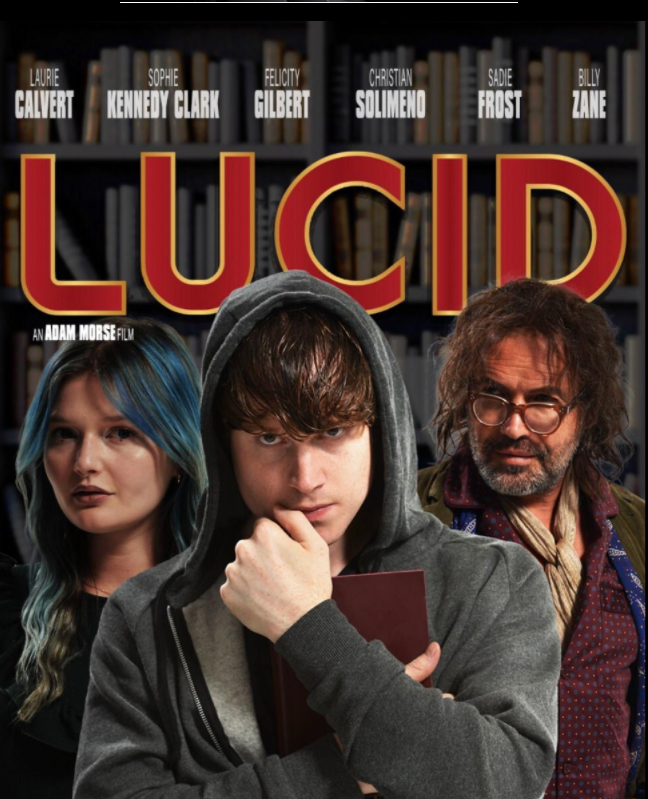 REVIEW OF LUCID – When dreaming gives a young man wake up call.
Available on Sky, Virgin, iTunes, Amazon, Xbox, Play Station, and Microsoft from
September 7, 2020.
Here is a story which breaks ground in some respects and has an angle of otherworldliness
and fact merging with fiction in the script.
Zel (Laurie Calvert – Episodes) ) – a young man finds his neighbour Elliot (Billy Zane –
Curfew, Titanic) wants to introduce him to the power of Lucid dreaming. A subtext of the
story seems to be about reaching maturity and having more amorous thoughts about love and
encounters with the opposite sex. Elliot gets Zel to keep a dream diary and Zel is counselled
by Elliot in cuddly raggle-taggle hair and “professor” mode about his experiences which
merge with his real-life into one colourful and exotic mix. The female roles include
seductresses in clubs and other characters who have a femme fatale or tantalising and teasing
presence in the story. Jasmine is a blonde dancer in a nightclub with a eye tantalising role.
Lucid also stars Sadie Frost (Absolutely Fabulous), Sophie Kennedy Clark (Philomena),
Felicity Gilbert (Nymphomaniac: Vol. 1”) and Cristian Solimeno (Rush).
Written directed and produced by Adam Morse, after premiering at the 72nd Edinburgh
International Film Festival where it was nominated for the prestigious Michael Powell Award
in the Best of British category, Lucid  went on to win Best Picture along with Best Actor for
Billy Zane and best director for Adam Morse at the 2019 Gold Movie Awards in London.
Very sadly, Writer/Director Adam Morse started losing his sight ten years ago due to a rare
mitochondrial disease that has left him with partial peripheral sight. Adam used screen reader
and magnification software to write his screenplay before going out to pitch his first feature
film project whilst keeping his condition a secret from others in the industry. Morse
eventually went on to be backed by Executive Producer Ben White and joined forces with
Producers Adam Rose and Julia Varvara to realize his vision. Adam used a 60-inch director&#39;s
monitor on set to follow the action, frame the shots, and direct the actors. Adam publicly
revealed that he is legally blind one week before the film made its festival premiere in
Edinburgh and he is now championing diversity by blazing a trail for differently-abled artists
around the world.
Morse is also now working as an actor and is set to appear in the British sci-fi/comedy The
Bystanders (2020 starring Lucy Pinder and Seann Walsh) and is currently starring opposite
Gary Beadle in the short film Suppression that is being directed by his close collaborator
Julia Varvara. Adam is developing multiple Film/TV projects with his production company
and is currently attached to direct thriller Hypnosis (2021), which is being Executive
Produced by American Media Mogul Ted Field and Radar Pictures. As well as keeping busy
as an actor and filmmaker, Adam has been recording music for his debut album which is
expected to come out December 2020. Lucid will be released in the UK on September 7,
2020.
Penny Nair Price