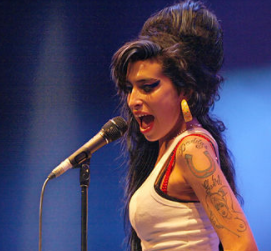 Amy Jude Winehouse, Camden singer born 14 September 1983,  to Jewish parents, her father window panel installer, mother a pharmacist,  died of alcohol poisoning at her come on July 23, 2011. The English singer, songwriter, and member of the National Youth Jazz Orchestra during her youth was nominated for British Album of the Year and on 10 February 2008, she received five Grammy awards including three of the General field “ Big Four” Grammy Awards Best New Artist, Record of the Year and Song of the Year ( for “Rehab”) as well as Best Pop Vocal Album. She was known for her deep expressive contralto vocals and her eclectic mix of musical genres including soul, rhythm, blues, and Jazz. Many of her album’s songs were influenced by jazz and apart from two covers, were co-written by Winehouse.

Her song “ Stronger Than Me” won her the Ivor Novello Award for Best Contemporary Song from the British Academy of Songwriters, Composers, and Authors.

With the release of her album Back to Back, in 2005, which went on to become an international success and one of the best-selling albums in UK history.