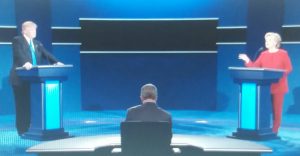 Following yesterday’s debate between Mr Trump and Mrs Clinton, Mr Trump told a crowd of 75,000 at a rally, that he was  holding back, stating,  “I didn’t want to do anything to embarrass her” regarding Mrs Clinton.

Looking at some of the issues raised, Trump said in 2012 that China had created global warming to upset US manufacturing and has also said it was a hoax.  He later told Fox News that it was meant as a joke – this year.

Mrs Clinton accused Trump of not releasing his tax returns including ones relating to a new casino but there were allegations that he had a business loss that he did not pay federal income tax for.  Mrs Clinton continued that Mr Trump’s tax plan would blow up debt to trillions and lose 3.5 million jobs.  She said her advisers say her plan will create jobs.

As regards the Iraq war Mr Trump said he was against it at the time, but there is no official record of that.

He said that  polls showed him coming out on top in the debates but mainly mentioned internet polls; apparently  every scientific poll taken in the aftermath of the debate showed  viewers believing Clinton had won.

The Republican nominee’s disillusion with what one site called “his widely panned performance” was evident. on several occasion at the rally, Mr Trump called out at “the corrupt corporate media” and gestured towards his supporters to turn towards the press pen to boo, hiss and even, in one instance, shout “go to hell”.

Mr Trump alluded to the debate stating, “I took a deep breath and pretended I was talking to my family.” Itemising  his “best lines” he included “You are experienced but it’s bad experience” – remonstrating how he had done well on the issue of trade and “exposed” Mrs Clinton’s “real positions” on Nafta, which he called “the single worst deal you’ll ever see”.

The debate moderator, Lester Holt, Mr Trump described as “the emcee”, for intervening when he praised stop and frisk, a controversial police tactic that involved New York police officers stopping pedestrians without a warrant, asking them questions and checking them for weapons. A federal judge ruled in 2013 that the practice was unconstitutional as it disproportionately targeted African Americans and Latinos. Trump insisted, “I also explained last night stop and frisk was constitutional. The emcee argued with me, taking up the time. Law enforcement does stop and frisk every day.”

On a contrary note, Mrs Clinton demonstrated a positive tone on Tuesday, mocking Trump’s complaints about his microphone. “Anybody who complained about the microphone is not having a good night,” she remarked to press.

Monty and Cat Alger, an ex-husband and ex-wife, remarked Trump had room for improvement and “could have done better”  because “he tells it like it is, whether you want to hear it or not.” Monty said of Mrs Clinton, “If it were up to me I would put her ass in jail”.  There was no comment on exactly why this lady made such a ferocious remakr.

Other reactions were that there were key issues not given coverage enough including security and work.

Grace Owens of Brunswick, Georgia, resplendent in a pink hat that read “deplorable” in cursive script and a T-shirt that proclaimed America First, thought neither candidate won the debate. In her analysis, Trump “needed to come out and hit her harder than he did.” She added: “He did OK but Trump can do better”.

Owens also took issue at those who might take offense at her shirt. Before Trump, the slogan America First had been associated with those wanting to keep the United States out of the second world war, many of whom were sympathetic to Nazi Germany. In her opinion, “they are just looking to attack Trump. Screw them.”

Apple’s new global and London headquarters
“Let us do it, and be ready for the challenge whenever it comes Jeremy Corbyn