Russell Hobbs has recalled 15 different models of irons after customers raised safety concerns about the products. The electrical manufacturer told people to stop using these irons,

because there was a risk that the flex could fail, and offered a replacement or refund. The company said consumer safety was its primary concern and apologised for any inconvenience caused.

Several customers posted on the firm’s Facebook page that their iron caught fire while they were using it.

Rebecca Scurr wrote: “Just want to warn people of potential danger. My husband was ironing today when it caught fire and burnt him. Lucky he quickly threw it to the floor (damaging our kitchen floor). Could have been a lot worse.” Another customer, Clare Joanna, said: “Today when using the Russell Hobbs Steam Glide iron it suddenly sparked and has burnt my hand badly. The electrical burn is incredibly painful and I would not want anyone else to go through this.”Jonathan Wells told the BBC’s Watchdog programme that his iron failed in June last year.

He said: “I realised from the pain in my hand that came straight after it that the iron had caught fire somehow and burned my hand.

“The pain was getting so bad I had to go into the kitchen and run it under the cold tap for probably about an hour.” ‘Utmost consideration’

A Russell Hobbs spokesman said: “The company’s primary concern is, as ever, for the safety of their consumers.

“Russell Hobbs has always taken their responsibilities as a manufacturer extremely seriously. The decision to recall these products has been taken with the utmost consideration for the public.”

The model numbers, found on a rectangular label on the underside of the heel of the iron, are: 18651 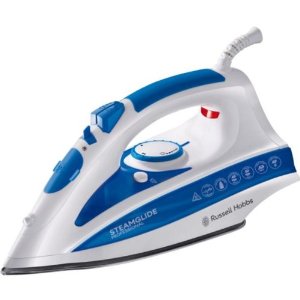 The company said irons with any other number sequence were not affected.

An  online recall notice for faulty Russell Hobbs irons which have injured a number of customers stated “As part of our ongoing quality monitoring programme, we’ve identified an issue with a small number of our irons, that may carry a risk….if you do have an affected iron, please stop using it immediately.”  Surely they should have given out more details of the affected products?

A list of the affected products on the website uk.russellhobbs.com  carries advice to stop using the irons immediately and ring the company on 0800 307 7616 or from a mobile 0333 103 9663.  Customers have complained that they could not get through on these numbers.

Rebecca Scurr whose husband threw his iron on the floor said the floor had then been damaged and the iron was actually on fire and burnt her husband’s hand.

Vice President of Russell Hobbs’s parent company Spectrum Brands, Tim Wright admitted that the firm had known about the fault for over a year.  He told Watchdog that the flex in the irons was the problem – “Every individual that’s contacted us, we’ve worked with to reach an amicable resolution” he said.

Further updates on this issue to come.