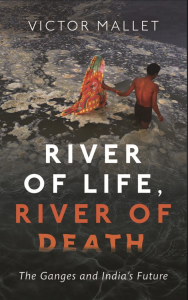 Ganga-Mata, the Ganges, purifier of souls Hinduism’s mother goddess, few rivers in the world are more esteemed and sacrosanct and few are more polluted and this paradox which afflicts India’s most famous river, from its glacial beginnings in the mighty Himalayas to its swampy end in the Bay of Bengal.

400 million Indians and 160 million Bangladeshi’s depend on Ganges basin the spiritual and material lifeline for the development of agriculture, industry and growth of cities.

Varanasi is the ancient city on the banks of Ganges where faithful Hindus come to die, the ultimate tirtha, or crossing point, between this world and the next. Paradoxically the same river that has come to be known for its raw sewage, industrial waste, urban jetsam, and bloated carcasses.

Victor Mallet questions soon after arriving in India as a bureau chief for his newspaper, why did the scared Ganges slip to such a sad state and what if anything can done about it?

Mallet, based in New Delhi as the FT South Asia Bureau Chief between 2012-2016, is a diligent reporter and researcher who combines fascinating history with acute observation of India today is brutally realistic about prospects for rapid improvement and come to this conclusion “ The first glimpse of an Indian river these days is rarely a pretty sight. In Moradabad is downright ugly, where Ramganga a tributary of the Ganges is littered with the stinking detritus of 23 drains, chemical effluent, human faeces, plastic bags, dead dogs, untreated and unfiltered.”

Further downstream on the Ganges are 400 toxic tanneries of Kanpur. Although few treatment plants that do exist are either not working efficiently or intentionally bypassed. One of Mallets interviewees cites boils, rashes, pustules and numbness in the limbs.” India is killing Ganges and the Ganges in turn is killing India. He exposes the environmental crisis of international significance, with revelations about extreme levels of pollution, antibiotic resistance, droughts and floods,

A gigantic hydroelectric dams upstream are starving Ganges of water and also several irrigation canals along its 1,569 miles route. During summer the river runs almost dry in places.

According to Mallet something could be done to clean the holy river, thinking back the Thames river was a stinking cholera-ridden cesspit during the industrial revolution which has been cleaned up and rates among the cleanest major rivers in Europe.

The upper stretch of Ganges and the downstream remain relatively healthy.

India’s Hindu nationalist Prime Minister Narendra Modi, has embarked on a £6.10 billion clean up operation but this is just the tip of the ice berg as the money is not enough, if you see Germany spend £42 billion on sewage treatment plants to rescue river Rhine.

In the past India’s copious clean-up plans all have fallen foul of the endemic corruption, bureaucratic incompetence and political short-termism.

In River of Life, River of Death, Mallet writes about the cultural and religious significance of the Ganges. His encounters with eco-minded godmen (sadhus) and assistant engineers vexing about gutter gates that the river and the country through which it runs comes to life.