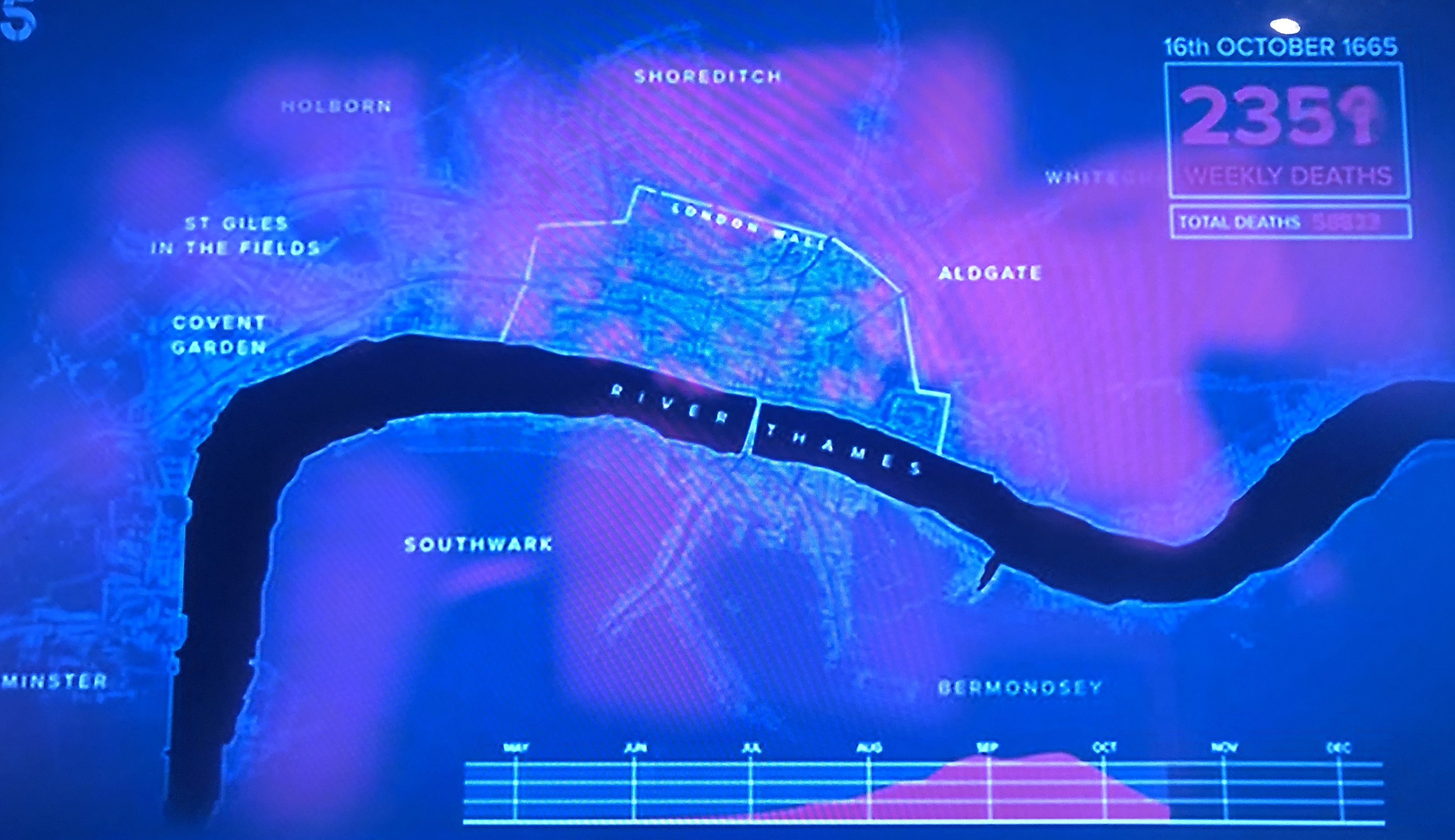 In late 1664,  a bright comet was to be seen in the sky and the people of London were fearful, wondering what evil event portended London, a 448acres surrounded by a city wall, which originally been built to keep out raiding bands. There were gates at Ludgate, Newgate, Aldersgate, Cripplegate, Moorgate, Bishopsgate and Aldgate and to the south lay the River Thames and London Bridge. In poorer parts of the city in the East London hygiene was impossible to maintain in the overcrowded tenements and garrets. There was no sanitation and open drains flowed along the centre of winding streets. The cobbles were slippery with animal dung, and litter thrown out of the houses, muddy and  buzzing with flies in summer and awash with sewage in winter. The City Corporation employed rakers to clean up the worst of filth which was transported to mounds outside the walls where it accumulated and continued to decompose. The stench was overwhelming and people walked out with handkerchiefs .

The earliest cases detected in the spring of 1665 in a parish outside the city walls called the St. Giles-in-the-Fields,  the death rates began to rise during the hot summer months and peaked in September when 7,165 Londoners died in one week. Rats carried the fleas that caused the plague, and were attracted by impoverished city streets filled with rubbish and waste especially in the poorest areas. Most Doctors, Lawyers, merchants fled the city, Charles II and his courtiers left in July for Hampton Court and then Oxford. Parliament was postponed and had to sit in October at Oxford. The plague was dreadful even the court cases were moved from Westminster to Oxford.

The Lord Mayor and alderman (town Councillors) remained to enforce the King’s orders to try and stop the spread of the disease. The poorest people however, remained in London with the rats and those people who had the plague. Watchmen kept guard and watched over infected houses. Parish officials provided food. Searchers looked for dead bodies and took them at night to plague pits for burial. All trade with London and other plague towns was stopped. The Council of Scotland declared that the border with England would be closed. There were no fairs or trade with other countries which meant thousands lost their jobs – from servants to shoemakers to candlestick makers to those who worked on the River Thames.

Following the return of Charles II to the throne in 1660 following the death of Oliver Cromwell, tradesman flock there in droves. Eager to win their custom thousands of craftsmen set up shop, selling everything from ribbons to stockings and wigs. They lodged in either Tudor houses or medieval tenement buildings that overhung the narrow streets in such insanitary conditions black rats thrived. Sir John Reresby told a grisly story of a bagpiper who fell down drunk in the street, woke up the following morning to find himself on the top of  a pie of corpses in a dead cart heading for one of the mass burial sites called plague pits. He began to play a tune. The  cart driver assumed the piper was the Devil, abandoned the cart and ran off .Country folk grew suspicious of fleeing Londoners.

With the arrival of summer, the disease began to take a firmer hold  as one of the earliest cases emerged in Dury Lane, Covent Garden, In the week beginning 2nd May  there were three recorded death in the Parish of St Giles and four in neighbouring St Clement Danes and one each in St Andrew Holborn and St Mary Woolchurch Haw.

Plague doctors traversed the streets diagnosing victims, many of them without formal medical training. Thinking bad air was involved in transmission, the authorities ordered giant bonfires to be burned in the streets and house fires to be kept burning night and day in the hope that the air would be cleansed. Tobacco was thought to be a prophylactic and it was later said that no London Tobacconist had died from the plague during the epidemic. Hundreds of bodies were said to have been hastily buried in the plague pits without coffins, care or ceremony.

There are three types of plague, but most of the sick in 1665-1666 had bubonic plague, which created swellings  in the lymph nodes found in the armpits, groin and neck. Plague sufferers also experienced headaches, vomiting and fever. They had 30 per cent chance of dying within two weeks. This type of plague spread from a bite caused by a black rat flea that carried the Yersinia pestis bacteria. The pneumonic plague, attacked the lungs and spread to other people though coughing and sneezing and septicaemic plague, which occurred when bacteria entered the blood.