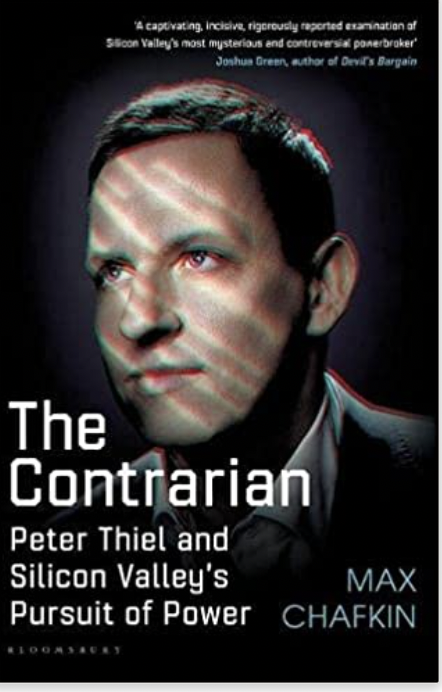 Entrepreneur, Peter Thiel, a right wing student at the Stanford University in the 1980 as a burgeoning conservative, and a tech investor from Silicon Valley over the past two decades, became the ardent backer of Donald Trump.

The Contrarian is the biography of venture capitalist Peter Thiel, the enigmatic, controversial and hugely influential power broker who sits at the dynamic intersection of tech, business and politics.

After the advent of the dot.com bubble in the late 1990s, no industry has made a greater global impact than Silicon Valley, as few individuals have done more to shape Silicon Valley than billionaire venture capitalist and entrepreneur Peter Thiel.

From the technologies, which we use every day are part and parcel of our daily life to the delicate power balance between Silicon Valley, Wall Street and Washington. Thiel is the critical factor behind the scenes operator influencing countless aspects of contemporary life.  Thiel has fought many of the tech, political and public policy battles successfully, Despite, this Peter Thiel is no public figure which is quite mysterious.

Thiel’s career has traced the highs and lows of the financial and tech worlds, bringing brief victory and defeat as a macro hedge fund manager during the financial crisis, as well as more enduring success as a venture capital investor.

From CEO of the payments platform PayPal to first outside investor and board member of Facebook and co-founder of controversial  big data company Palantir, he has his hands on some of the most important tech companies of the age.

Bloomberg business reporter, Max Chafkin’s biography chose to paint Thiel as a most unlikeable villain. Thiel’s years as intellectual wunderkind, tech investor, would be hedge fund visionary  and rightwing political influencer, ascribing the worst of motives  to its subject who, we are led to believe, set the tech industry on an amoral pursuit of wealth and power.

His libertarian leanings have involved backing movements such as seasteading, which holds that living on a platform moored at sea offers one of the only routes to freedom from government.

His interest in medical inventions to defeat death made Thiel the inspiration for a memorably messianic but naïve character, an investor called Peter Gregory, in the HBO comedy show Silicon Valley.

Thiel is one of the few people left in Silicon Valley who is interested in truly revolutionary ideas, rather than the unchallenging business notions of the current tech era, such as social media.

Chafkin, claims Peter was banned from making further internal speeches to Facebook staff after casually suggesting  that  the social network was an uninteresting idea compared with things the tech world should be interesting.

He used his Facebook board member to steer CEO Mark Zuckerberg into taking lenient stance towards disinformation stemming from the right during the Trump Presidency.

Chafkin concludes public posturing amount to intellectual camouflage for a fundamentally cynical worldview. Thiel’s investment philosophies provide cover for an amoral willingness to explicit ant situation to his own advantage.

His secret funding of an invasion of privacy lawsuit that bankrupted the blogging empire Gawker, which was frequently the target of litigation.

One unnamed source reveals Thiel’s relationship with Tesla founder Elon Musk, which had been fraught since he was involved in a mutiny to force Musk out as CEO of PayPal: “Musk thinks Peter is a sociopath and Peter thinks Musk is a fraud and braggart”.

Thiel is accused of using sharp tactics to fuel growth at PayPal in the process seeding “unsustainable or ethically dubious tricks” that later led to bad behaviour at companies such as Uber.

Silicon Valley, today feels under the sway of a powerful group of monopolists, and the institutions needed to ensure continued US technological leadership.