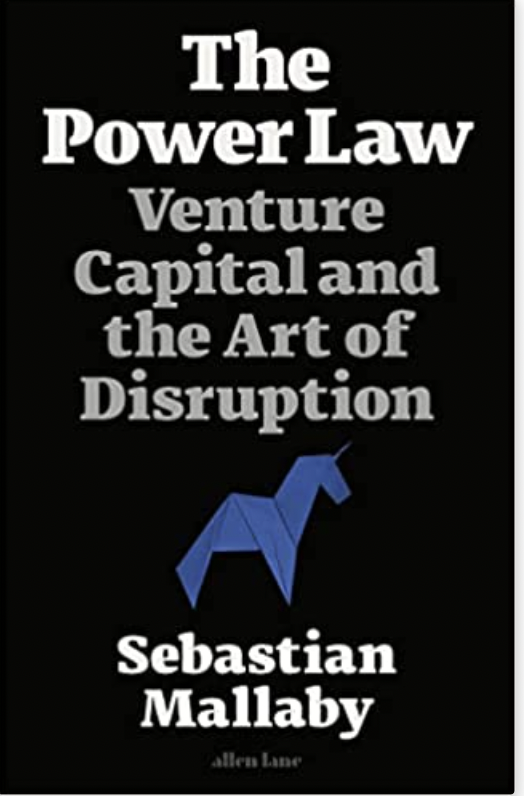 Award-winning financial historian delves into character-driven story of venture capital and the world it made.

“Innovations rarely came from experts” Jeff Bezos, Elon Musk was not in the auto industry.  When it comes to innovation, the future cannot be predicted, it can only be discovered. Most attempts at discovery fail, but a few succeed at such a scale that they more than make up for everything else. The extreme ratio of success and failure is the power law that drives venture capital. Silicon Valley, the tech sector, and by extension, the world.

Mallaby tells the story of this strange tribe of financiers who have funded the world’s most successful companies, from Google to SpaceX to Alibaba. The Power Law make sense of seeming randomness of success in venture capital, an industry that relies, for good and ill, on gut instinct and personality rather than spreadsheets and data, We learn the unvarnished truth about some of the most iconic triumphs and infamous disasters in the history tech from the comedy of errors that was the birth of Apple to the venture funding that fostered  hubris at WeWork and Uber to the industry’s notorious lack of women and ethnic minorities.

The Power Law has transformed tomorrow’s possibilities into today’s reality like China’s digital economy beyond recognition, and London is one of the top cities for venture capital investment. By taking us so deeply in to the Venture Capital’s game. The Power Law helps us think about our own future through their eyes.

In May 1976, a California securities regulator wrote to Kleiner Perkins, a venture capital fund to deliver a warning about the riskiness of its $100, 000 investment in Genentech, an early biotechnology start-up. Its co-founder Eugene Kleiner said, “We are in the business of making highly speculative investments”, who made return of 42 times on its first investment fund after Genentech went public in 1980, to prove the Power Law of venture capital: a small minority of investment produce most of the returns,  by getting  right couple of investment bets out of many to generate big profits.

Mallaby has focused on the entrepreneurs who remade the world with technology such as Elon Musk, Bezos, and Mark Zuckerberg, than those who backed them.

There are fewer investors then willing to stake money on risky ideas, and funds often worked “ with entrepreneurs in an entrepreneurial way” Tom Perkins of Kleiner Perkins said.

Sequoia and Kleiner Perkins jointly put only $24m into Google in 1999, when the company went public five years later, it was valued at $23bn.

In Uber Benchmark had to plot to defenestrate the wilful co-founder Travis Kalanick, and at WeWork, Adam Neumann was brought down by a failed attempt at an IPO.

Mallaby concludes “ venture capitalists as a group have a positive effect on economies and societies”. They have proved powerful.