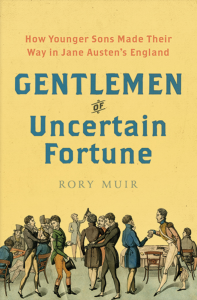 In the era of Jane Austen only the eldest sons could inherit wealth, and how a single man not in possession of good fortune, will just have to roll up his sleeves and work for his living. Rory Muir reveals the customs of English aristocrats and their bourgeois imitators was to leave all their wealth to eldest sons.

These heirs had the whip hand over relatives. “Spares” as young brothers have sometimes been designated in Regency England, depended on handouts, meagre inheritances or worst of all getting jobs.

Readers of Jane Austen gain a idea of the task facing the daughters of gentlemen. They need to secure a husband who can enable them to keep or even improve their social and economic status. Primogeniture meant that even those from wealthy background often had to earn their living. While for girls marriage and career tended to be synonymous , for many of their brothers a profession came first, and then with luck a marriage would follow, since “a single man in possession of a good fortune must be in want of a wife.

At one point he even reverses the gender of the Bennet sisters in order to speculate about the career path each might have followed – poo rMary woul have become an attorney and ripened fully into pomposity and dullness with years and success” .

The principal options can be told off on one’s fingers, the church, medicine, the law, banking and commerce, Civil office the army, the Navy, Service in India.

Muir also plots career trajectory of Jane’s own brother Francis Austen, who saw distinguished action at sea, then cooled his hells on half-pay for 30 years, before being abruptly promoted to admiral. John Scott’s 18-year-old beloved climbed down a ladder from her bedroom window and the romantic pair eloped to Scotland. John became a barrister, but struggled to make a living. One year he promised to treat himself to all his income for 11 months, leaving only the final month’s money for his wife. His earning only arrived in December. Still through talent and hard work he ended up Earl of Eldon, Lord High Chancellor of Great Britain.

Boredom and frustration were as common then as now, and the transition of cosy home to professional life was a wrench for many.

Gentlemen of Uncertain Fortune: How Younger Sons Made Their Way in Jane Austen’s England by Rory Muir, Yale £25, 384 pages.