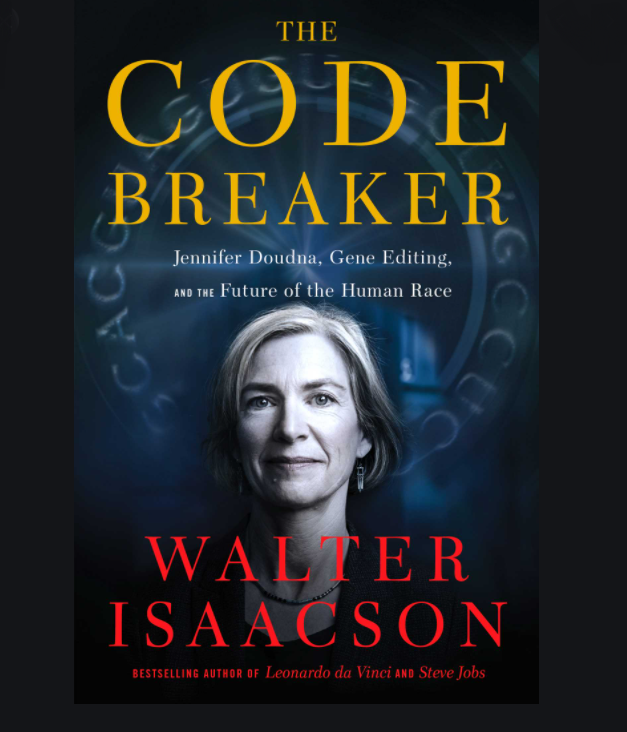 Walter Isaacson’s famous biographer of Steve Jobs, Leonardo da Vinci, Albert Einstein, and Ben Franklin discusses the life, career, and ethical implications of scientist Jennifer Doudna, cocreator or CRISPR and the 2020 winner of the Nobel Prize in Chemistry. New technology has the power to optimise our DNA, transform medicine, and allow us to cure diseases, fend off viruses, and have healthier designer babies. While growing up in Hawaii, in sixth grade, Jennifer Doudna was inspired as she read the paperback, The double Helix and discovered as she read through the pages, she became enthralled by the intense drama behind the competition to discover the code of life, despite her high school counsellor telling her girls didn’t become scientists, so she decided to take the challenge and become one.

Driven by a passion to understand how nature works and to turn discoveries into inventions, she would make what the book’s author James Watson, told her was the most important biological advance since his co-discovery of the structure of DNA. She and her collaborators turned a curiosity of nature into an invention that will transform the human race, an easy-to-use tool that can edit DNA, known as CRISPR, it opened a new world of medical miracles and moral questions.

The development of CRISPR and the race to create vaccines for coronavirus will hasten our transition to the next great innovation revolution. The past half-century has been a digital age, based on the microchip, computer, and the internet. Now we are entering a life science revolution. Children who study digital coding will be those who study genetic code.

Maybe we should use our new evolution hacking powers to make us less susceptible to viruses and help mankind. What a wonderful boost would be if we can prevent depression. Should we allow parents, if they can afford it, to enhance the height or muscles or IQ of their kids?

After ultimately discovering CRISPR, Doudna became a leader in tackling these moral issues and with her collaborator Emmanuelle Charpentier won the Nobel Prize in 2020. Her story is a thrilling detective tale that involves forensically analysing the most profound wonders of nature, from the origins of life to the future of our species.

In November 2018, He Jainkui, a Chinese scientist stunned the world by announcing he had helped to produce genetically edited babies, the arrival of twins Lulu and Nana, in Shenzhen, who had been edited as embryos to supposedly reduce their likelihood of being infected with HIV, sparked immediate outrage and condemnation from other scientists. The Chinese government later sentenced He to three years in prison, although it did not spark a global ethical debate about  CRISPR the gene-editing technology that will almost certainly be used to change the course of life.

The world clashed over how to regulate the digital revolution, decades after those technologies had been unleashed, debates over building guardrails for the genetic revolution also risk being left until too late.

Rivals at MIT, Feng Zang who pipped them to the post in publishing a paper that showed how he used CRISPR successfully in human cells, argue it was a leap forward in its own right.

Jennifer Doudna was told on Thanksgiving 2018, by an email with the subject line “Babies Born”,  and told her he had done what scientists had called for a moratorium on edited not just the cells of a human but an embryo, making a change in the CCRS gene could be passed down for generations. Doudna was shocked and rushed to a conference in Hong Kong, where she persuaded He to take the stage and explain his experiment.

CRISPR is a simpler to use tool, Clustered Regularly Interspaced Short Palindromic Repeats. It was developed by bacteria billions of years ago to fight viruses. But the real breakthrough came in 2012 when scientists Jennifer Doudna and Emmanuelle Charpentier showed how snippets of CRISPR could be used to identify stretches of DNA, guiding an enzyme known as Cas9 to snip out or change its function.

The technology, however, could transform medicine and is used to treat genetic diseases, such as the blood condition sickle cell Anaemia, in small human trials.

CRISPR has been adapted to work as a diagnostic in new Covid-19 tests and, in the future, it could be used to defeat viruses.

But some fear it could also enable humans to play God. They see a clear sign between editing a living person with a disease and editing an embryo with changes-such as removing genes responsible for inherited diseases such as Huntington’s or enhancing children into so-called designer babies. These alterations known as human germline genome editing, are passed down forever.

In The Code Breaker, Walter Isaacson recollects the drama of the discovery in a digestible narrative that tackles the promise and the perils of CRISPR. The next great scientific revolution lies in biology and in Doudna, the co-discoverer of CRISPR, Gro

He inadvertently had set the world on an uncertain path to reshaping humanity.

The Code Breaker: Jennifer Doudna, Gene Editing, and the Future of the Human Race by Walter Issacson, Simon & Schuster £30, 560 pages.

British Independent Film Awards
Productive disagreements- get to know the other guy, show empathy, be curious