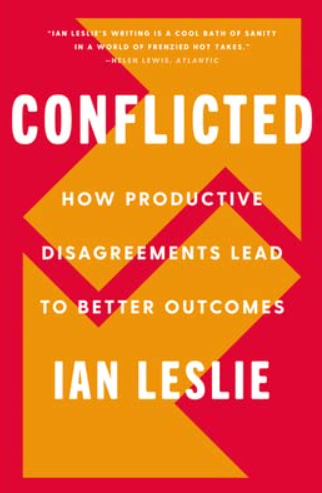 From the invention of the aeroplane to the success of The Rolling Stones, and combines them with fascinating insights from the science of human communication. Arguments at work, at home or in public, confronting our differences is the only way to make the most of them, Conflicted is about how to argue successfully.

With the advent of social media, arguments are more visible and more audible disagreements which provoke more anxiety.

The fracturing of generational opportunity, equitably distributed economic growth and globalisation promote the angst. A failure to recall tested techniques of argument that make our species uniquely innovative and productive, which reach back to Aristotle.

Conflicted focus on collective rather than individual intelligence, and how diversity and informed debate can improve outcomes.  Leslie is interested in emotion as much as intelligence, and how it can obstruct or assist the quest for truth, despite its risks, and the pain it causes when it leads to outright hostility.

“Open, passionate disagreement blows away the cobwebs that gather over even the most enduring relationships… as it flushes out crucial information and insights that will otherwise lie inaccessible or dormant inside our brains. It fulfils the creative potential of diversity” he adds.

Leslie cites the Wright Brothers, who were taught by their father not only to argue fiercely but also to swap sides in the middle of an argument and take the opposing position. “The brothers didn’t argue dutifully; they took delight in it. Orv’s a good scraper “ said Wilburn fondly.

The brother’s ability to test fiercely the strengths and weaknesses of the other’s opinions without becoming blinded relied on both trusting the motives of their machine fly at Kitty Hawk in 1903.

They employed the version of Aristotle’s Socratic method, with one debater testing the other’s argument, rather than a single person trying to weigh up all sides independently. In order for this to work both have to commit to truth-seeking rather than fight for prestige and status.

Today’s provocations can be heard around the world and little context and no innate empathy with Twitter, making it easy for debate to become bitter.

The 10 “Rules of productive argument”, which Leslie deduces from encounters with specialists in interrogation and hostage negotiations, and most boil down to the morals of every Pixar movie- get to know the other guy, show empathy, be curious.