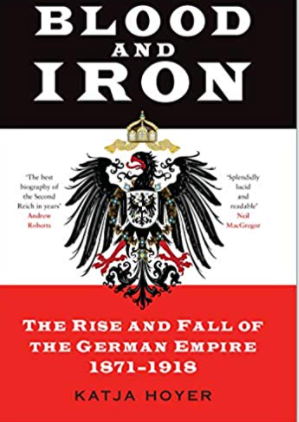 Germany was united for the first in its modern history 150 years ago for two reasons.  Before 1871, Germany was not a nation, but an idea its founder, Otto von Bismarck, had a formidable task at hand as to how would he bring thirty-nine individual states under the yoke of a single Kaiser, convincing proud Prussian, Bavarian, and Rhinelanders to become Germans? Once unite could the young European nation wield enough power to rival the empires of Britain and France all without destroying itself in the process? German empire’s proclamation on January 18, 1871, at the Palace of Versailles outside Paris after the war of 1870, without a civilian on sight, Katja Hoyer, a German-born author who teaches history in the UK says in Blood and Iron, the German Empire from its violent beginnings to its calamitous defeat in the First World War, a tale of national self-discovery, social upheaval, and realpolitik, that ended, as it started, revealing political fragility, and persistent militarism.  “This was a far cry from the democratic unification of which the liberals had dreamed”.

Under Otto von Bismarck and Kaiser Wilhelm II, Germany was a country “whose patriotic fervour needed a constant diet of conflict to fill the holes torn in the social fabric by inequality, geographical separation, and cultural differences”.

Bismarck sharpened domestic tensions by marking out Catholics, socialists, Poles, and other national minorities as Reichsfeinde –“enemies of the Empire” and led Europe in the 1880s with an early version of the welfare state that to a degree balanced the country’s explosive industrial growth.

Bismarck exercised restraint in the foreign policy up to his resignation in 1890.

According to Hoyer, the heart of the problem lay in the way that the political system- authoritarian with democratic features- exacerbated conflicts inherent in the structure of German society.  Governments were not answerable to the Reichstag, which elected by universal male suffrage, and needed legislature’s approval to pass laws, including military budgets.

It became apparent for  Bismarck’s successors the difficulty of managing Reichstag, where the Social Democrats became the largest party in 1912. The SDP, liberals, Catholics, and conservative agrarians all with strong roots in different strata of German society squared off against each other. Outside parliament governments were under pressure from powerful court faction of army officers and aristocrats and militant nationalist leagues.

The offer of unconditional support for Austria-Hungry in the July 1914  crisis and the risk of a European war lies in Germany’s domestic deadlock.

As the war unfolded “ the ease with which the German people had allowed their semi-democratic system to descend  into a military dictatorship  stood testimony to the fact that parliamentary culture was still in its infancy.”

The book treats imperial Germany as an era on its own terms rather than as an inevitable overture to the horrors of 1933-1945.