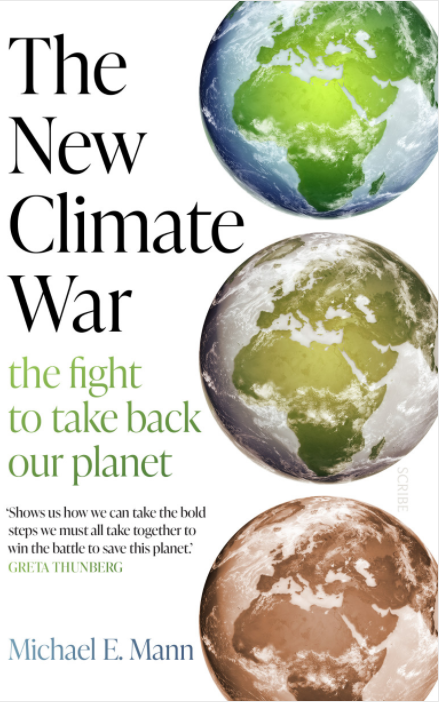 “Recycle, Fly less, Eat less meat”, are some of the ways that we’ve been told can slow climate change, but the emphasis is on individual behaviour is the result of a marketing campaign that has succeeded in placing the responsibility for fixing climate change squarely on the shoulders of individuals. Fossil fuel companies have followed the example of other industries deflecting blame, as they have blocked efforts to regulate or price carbon emissions, run PR campaigns aimed at discrediting viable alternatives, and have abdicated their responsibility in fixing the problem they have created resulting in a disastrous planet.

Raging wildfires, melting icebergs, deforestation of the Amazon, and deadly floods drive a new sense of urgency about how to curb global warming as we all environmentalist now.

Mann, a Pennsylvania State University professor whose unique view is to cut the world’s dependence on fossil fuels.

Mann draws the lines between the people and the polluters – fossil fuel companies, right-wing plutocrats, and petrostates. Mann outlines a plan for forcing our governments and corporations to wake up and make real change, including a common-sense attainable approach to carbon pricing- a revision of the well-intentioned but flawed currently proposed version of the Green New Deal: allowing renewable energy to compete fairly against fossil fuels, debunking the false narratives and arguments that have worked their way into the climate debate and driven a wedge between even those who support climate change solutions, combating climate doomist and despair-mongering with immensely powerful vested interests aligned in defense of the fossil fuel status quo, the societal tipping point won’t happen without the active participation of citizens everywhere aiding in the collective push forward.

His simple chart in science the hockey stick showing global temperatures had varied little for centuries but shot up after fossil fuel burning took off after the industrial revolution, as the world is warming at an alarming rate unseen in modern history and humans were causing it.

Mann who faced death threats and blistering efforts to discredit his work, in the US, Republicans in Congress many of the recipients of fossil fuel industry donations, accused him of inaccuracy, fraud, and worse, as he recollected in his book in 2012, The Hockey Stick and the Climate Wars. Despite the passing of a decade the science behind the hockey stick remains robust.

In his new book, he said, “ The war on climate war has ended but in its place war on climate action or “ a softer form of denialism” in which “ intactivists” deploy a mix of deception, deflection,  and distraction to delay cuts in emissions.  Personal actions can help often, however, they cannot rival broad, systemic measures such as carbon pricing or ending fossil fuel subsidies. For all the scrutiny of flying, it currently accounts for about 3 per cent of global carbon emissions. A focus on personal behaviour creates an illusion of progress that can erode support for more effective collective policies.

Celebrity climate activist Leonardo DiCaprio, is often lambasted for flying in a private jet. Oil companies were early promoters of the personal carbon footprint calculator and there is a well-thumbed playbook for industries seeking to divert attention from their own activities to individuals using their products.  “Guns do not kill people, People kill people” to fend off tougher laws, beverage groups back campaigns against roadside litter created by their own bottles and cans.

Soft denialism is more insidious because it are promoted by green activists themselves.  What Mann calls climate “ doomists” promote the idea that all hope is lost and action is fruitless.

The New Climate War: The Fight to Take Back Our Planet by Michael EMann, Scribe £16.99, 368 pages

Plots at Amazon rainforest being sold illegally in Facebook Marketplace
Elite on the top rungs have clung to their perch, and prevented others from ascending