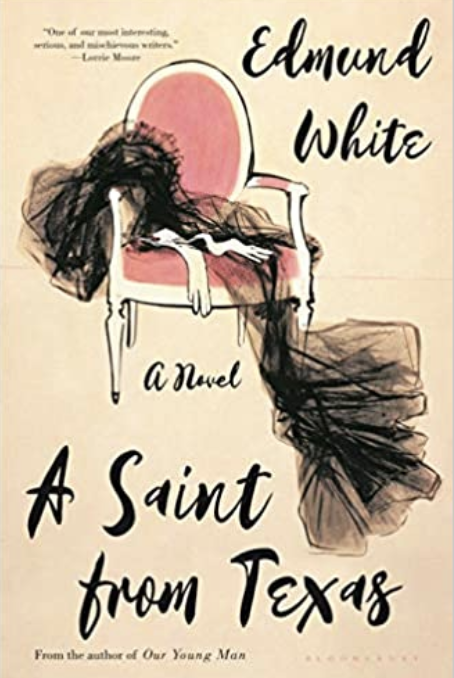 A tale of two Texas sisters whose destinies could not be more dissimilar, one destined for Parisian nobility and the other for Catholic sainthood.

Although an untold fortune of oil lies beneath their father’s land, both girls harbour their own secrets and dreams that will carry them far from Texas and from each other.

Years later Yvonne will ascend the highest ranks of Parisian society as Yvette gives herself to a lifetime of worship and service in the streets of Jerico, Columbia.Although they remake themselves in their radically different lives, the twins find that the bonds of family and the past are unbreakable.

Novelist, memoirist and Playright, legendary ass a chronicler of 20th century gay life, Edmund White, 80-year-old’s  A Saint From Texas  the twins find themselves at the age 22  in widly opposing worlds – one  in a Columbian convent and on her way to sainthood and the other  wedded to a French baron an installed in a palatial apartment  on Paris’s Avenue Foch.

Yvonne Crawford, the narrator and sister who will marry into aristocracy , introduces herself like a Texan Slyvia Plath,  recounts  her childhood on a ramshackle ranch outside Dallas – one that comes to yield  millions of dollars’ worth of oil and paves Yvonne’s way into southern “society”.

She spends her teenage year pretty and popular, kissing, smoking and preventing the boys from slipping their hands  past her panty line. She has little in common with her twin Yvette, a reclusive individual\with a taste for plato, and the disapproval of her abusive Baptist raised father, Catholicism.

In of the evenings Yvonne is introduced to her landlady’s nephew, th heiress-hunting baron Adheaume de Courcy.They marry and he spends her millions on mistresses and refurbishing the family chateau. The villain never evolves beyond a caricature, but does handily serve as an opportunity for White to deliver some choice comments about a class of Frenchmen who live without vocation.