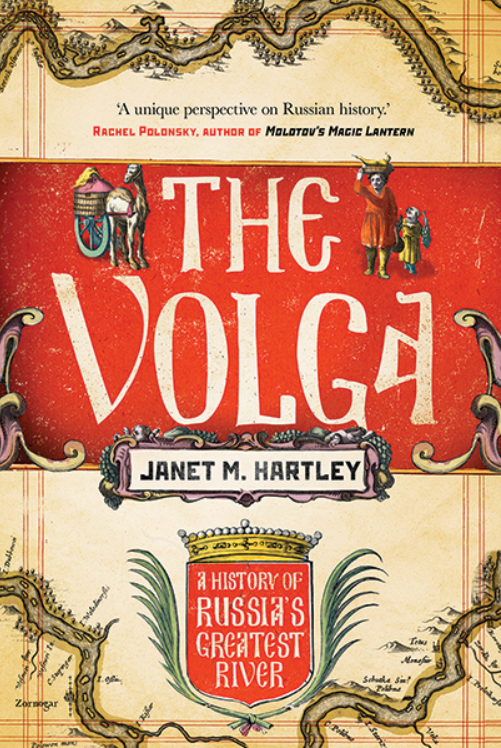 The longest river in Europe, the Volga stands for the Russian national spirit, where exhausted from the second world war’s most destructive battle, Soviet soldiers washed in its waters, a form of mass baptism before the terrible battle for freedom. The river has played a crucial role in the history of the peoples who are now part of the Russian Federation and has united and divided the land through which it flows. Hartley tells the story of Russia’s diverse people, vital place in history and looks at it as an artery for trade and as a testing ground for the Russian Empire’s control of the borderlands, and how it featured in Russian literature and art, and how it was crucial for the outcome of the second world war at Stalingrad.

The Volga,  Russia’s greatest river, came under full Russian control only after Ivan the Terrible’s conquest of the Khanates of Kazan and Astrakhan in the 1550s. This territorial expansion, established Russian sway over the Volga’s entire length, gave access to the Caspian Sea, and opened the road to Siberia. This marked the beginning of Russia’s transformations from being an essentially homogenous nation to one that came to embrace new peoples, new cultures, and new religions.

Janet Hartley, emeritus professor of international history at the London School of Economics had produced a study of the Volga and accessible to general readers “Although the Volga was never the geographical border between Asia and Europe, in many ways the middle and lower Volga does draw a line between the Christian, Russian, European West, the Islamic, and the Asiatic east”.

Catherine the Great, the German-born empress who usurped the Russian throne from her husband in 1762 and toured her Volga dominions five years later. From the multi-ethnic city of Kazan, she wrote to Voltaire, h4er French philosopher penfriend: “ I am in Asia … there are in this town 20 diverse sets of peoples who in no way resemble each other”.

Famously, Catherine invited thousands of German colonists to settle on the Volga where they farmed their lands in peace for almost 200 years until Josel Stalin deported them en masse to Siberia and Kazakhstan in 1941. The arrival of Germans in Catherine’s reign prompted some 150, 000 local Kalmyk inhabitants to pack up their tents and leave for their ancestral homelands on the Chinese border. Attacked by bandits and suffering from extreme weather, up to 100, 000 died according to Hartley estimates.

In the 19th century, upper Volga hosted the gigantic trade fair at Nizhny Novgorod, a city described by the Marquis de Custine, a French aristocrat who was hard to please in matters of Russian, as the most beautiful town I have beheld in Russia.

The Volga played a central part in the great events of 20th-century Russian history, from the civil war that followed the 1917 Bolshevik coup to the second world war. The victory at Stalingrad is a cornerstone of Vladimir Putin’s efforts to persuade Russians that they must have a strong, fortress-like state because ill-intentioned foreigners, especially to the west, lie around the corner.

Under Soviet leadership, industrial progress was achieved, at a terrible environmental, economic and human cost according to Hartley. Soviet repression of religion had long-term consequences, in the post-communist era, there are tensions between the Russian state and the emergence of a Muslim-influenced Tatar national consciousness in “Tatarstan”.

Kyiv is now the capital of Ukraine, which captures the way in which the Russians down the centuries have thought of the Volga as embodying their nation’s identity and fate. It flows for more than 3, 500 km from its source north-west of Moscow to the Caspian Sea, which has served both as protector of “Mother Russia” against foreign enemies and as a symbol of freedom for those, like the peasant rebels of tsarist times and the early communist era, who resisted an oppressive state.