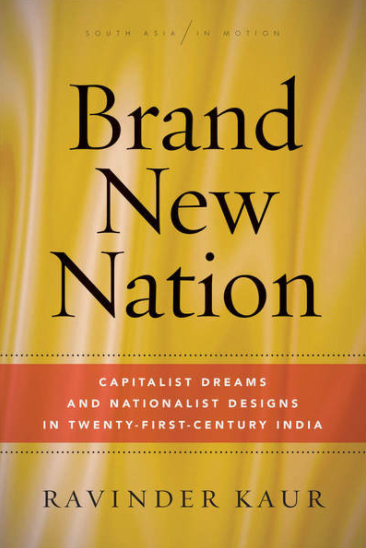 A highly provocative book by an Indian academic who is the Associate Professor of Modern South Asian Studies at the University of  Copenhagen, revealing how India is being repackaged into a national brand  to be sold to foreign investors, part of ongoing historical shift. “The capitalist transformation of India wherein the logic of capital is the glue holding the nation and state together”  Kaur argues.

The main narrative was the emergence of the BRICS nations- leading stars in the great spectacle of capitalist growth stories, as resource-rich hubs of untapped talent and potential and newly opened up for foreign investments. The old third-world nations were rapidly embracing the script of unbridled capitalism in the hope of arriving on the world stage. The tantalising promise of economic growth invited entrepreneurs to invest in the nation’s exciting futures, which offered utopian vision of “ good times” and even restoration of lost national glory, to the nation’s citizens.  Brand New Nation delves into the past and inevitably, the future of this phenomenon as well as the fundamental shifts it was wrought in our understanding of the nation-state.

The infusion of capital not only rejuvenates the nation, but also produces investment-fuelled nationalism, a populist energy that can be turned into a powerful instrument of coercion. The book also reveals the close kinship among identity economy and identity politics, publicity and populism and violence and economic growth rapidly rearranging the liberal political order the world over.

Professor Kaur tracks the two decades of mega-publicity campaigns that have gone into producing “Brand India” as a desirable commodity for global investors.

How do cultural nationalism and capitalist growth together produce images of a modern India which is nevertheless rooted in decisively Hindu antiquity?  How does the figure of aam aadmi or common man, associated with the 2011 anti-corruption campaign, become yet another locus from which entrepreneurship and free markets can once again be championed? This book addresses several questions with clarity and insight and is an important must-read for all interested in contemporary India, media and cultural studies, and the making of modern India.