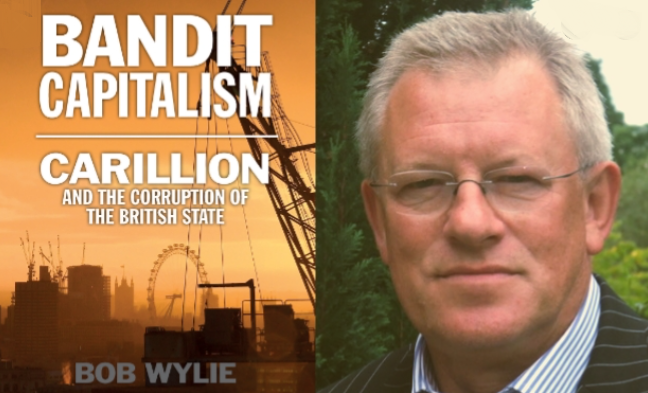 The construction giant Carillion, an outsourcer of huge Government building contracts, leading to one of the greatest financial scandals of modern times following their collapse in January 2018. When it folded it had only £29 million in the bank and debts and other liabilities adding up to a staggering £7 billion, amounting the final total losses established that the banks were owed £1.3 billion in loans and there was a hold in the pension fund of £2.6 billion. British taxpayer joined the long list of creditors, losing about £150 million.

The directors systematically looted the company with the aim of their own enrichment.  The Carillion catastrophe exposes everything that is wrong about the state we are in now- the free-for-all of company laws which govern directors’ dealings,  the toothless regulators, the crime and very little punishment of the Big Four auditors, and a government which is a prisoner of a broken model born of a political ideology which it cannot forsake. Bob Wylie exposes the lawlessness of contemporary capitalism that is facilitated by hapless politicians and gives a warning for the future that must be heeded. According to Carillion plc Annual report and Accounts 2016/1 March 2017, P-43, “ the board has increased the dividend in each of the 16 years since the formation of the company in 1999. In the five years to 2016, the directors recommended paying £357 million of dividends to shareholders, despite generating just £159 million of cash from operations. Over the same period, the bonuses for two top executives climbed from nothing to more than £1 million a year in 2016”.

Berkhamsted, 35 miles up the M1 out of central London, off Shootersway there’s a millionaires’ row- Blegberry Gardens, and on 1st March 2017, Richard Adam, the former financial director of Carillion, was probably in his six-bedroom mansion there waiting for the call. He’d left his post in Carillion the previous December, and told the Carillion board that he wanted to spend more time with his family. On 1st March 2017, when the Carillion 2016 Annual Report and Accounts were published, the first day Adam could cash in his first tranche of Carillion shares after he was satisfied that he was entitled to the return after all he had done for the company and wasn’t about to miss his chance.  The first disposal of shares made Richard Adam £534, 000, not bad on top of the £1.1million final salary and bonuses package he’d been paid by the company on his departure, which included £460, 000 in base salary, £140, 000 in bonuses, £278, 000 in previous share awards and £163, 000 straight into his pension pot. Contrary to normal company protocols, the bonus figure was paid in cash, the usual practice was part cash, and part share options.

On 8th May, Adam’s second disposal of long-term incentive shares netted him £242, 000 that made his share bonus worth more than three-quarters of a million pounds £776, 000 to be exact.

While Carillion folded with £7billion liabilities, and banks being owed a further £1,3 billion in loans and there was a hole in the pension fund of £2.6 billion, while Richard Adam insists that Carillion’s downfall was nothing to do with him because allegedly he left the company in rude health, he simply can’t offer the same mitigation as regards the pension fund’s deficits.

Under the 2004 Pension Act, company directors have legal obligations to ensure appropriate assets and funding are available for them to meet their liabilities in providing for employee pensions, with independent valuations to be carried out every three years to assess the state of funds, to determine whether the legal funding objectives are being met.

Bandit Capitalism: Carillion and the Corruption of the British State by Bob Wylie, Birlinn  £14.99.

The logic of capitalism
“I think it was just racism, pure and simple” David Dinkins