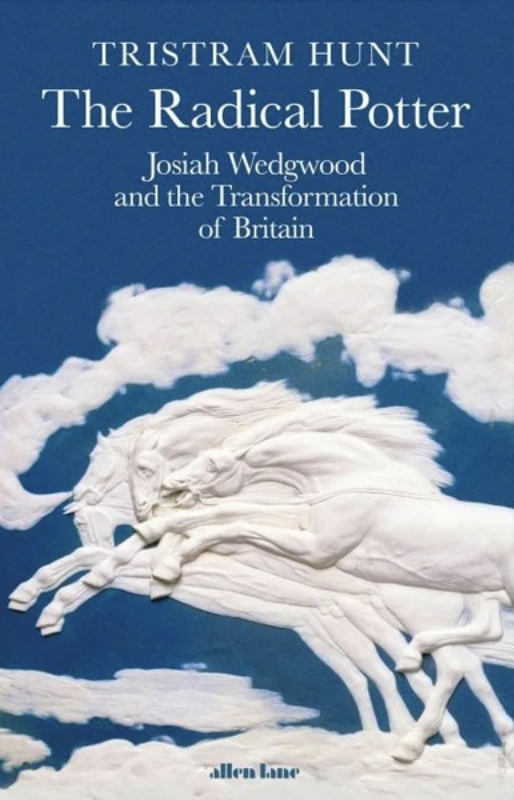 Josiah Wedgwood, the greatest English potter who ever lived, epitomised the best of his age, from his kilns and workshops  in Stoke-on-Trent, which revolutionised the production of ceramics in Georgian Britain by marrying technology with design, manufacturing and efficiency and retail flair. He was responsible for transforming the luxury markets not only of London, Liverpool, Bath and Dublin  but of America, and the world and helping other mass consumer society.

Tristram call him ”The Steve Jobs of the eighteenth century”.

Wedgwood with his radical mind and politics as well s his designs, who campaigned for free trade and religious toleration, read pioneering papers to the Royal Society and was a member of the celebrated Lunar Society of Birmingham. He create the ceramic “Emancipation Badge”, depicting a slave in chains and inscribed “ Am I Not a Man and a Brother” that became the symbol of the abolitionist movement.

The Radical Potter is a highly enjoyable new biography strongly based on Wedgwood’s notebooks, letters and the words of his contemporaries, brilliantly captures the energy and originality of Wedgwood and his extraordinary contribution to the transformation of eighteenth-century Britain.

Josiah Wedgwood, a scientist and restless innovator, was the driving force behind the global success of the country’s ceramics Industry in the second half of the 18th century.

He pioneered and developed new vastly more sophisticated manufacturing techniques, and was the first to understand the power of consumer advertising and marketing.

He was active in the public realm- a leader in development of England’s road and canal systems. And a champion of abolitionist movement at time when many of his peers still regarded slavery as a necessary part of economy.  He was curious and hugely ambitious  and even at the heigh to his success, he continued to spend hour after hour in his laboratory, working with kilns, glazes and clays in search of new materials.

His dreams were bold writing to his business partner about Jasperware, the stoneware rival to porcelain that was one of his many innovations.

He said his goal was nothing less than to “astonish the world all at once, for I hate piddling you know”.

His genius emerged at time when an increasing population and expanding economy meant growing numbers of households were generating incomes that catered for more than their immediate needs. For the first time they could start think about wider ranges of consumer goods and services.

As the craze for tea drinking spread, so did the wish for something better than cheap earthenware to serve it in.

Expanding consumer demand, new sources of energy, the growth of specialist trades that greatly improved workplace productivity and all this helped to turn North Staffordshire into a great manufacturing centre.

Then there was the rise of global trade with sea lanes protected by Royal Navy. In return for suitable gifts British Ambassadors and their wives around the world proved more than willing to make a “proper and noble introduction” of Wedgwood products to elite overseas circles. By the 1780s, Foreign sales accounted for 80 per cent of the company’s production, giving it a dominant position in North America and a strong presence right across the continental Europe.

Encouraged by British Ambassador to Russia, Empress Catherine the Great placed the larg4est order the company ever received a service of 944  pieces, each decorated with a green frog and views of English countryside. The production costs were extremely high but Wedgwood ensured that the whole of the polite society knew about the support of his royal patron. An advertisement on page one of the Public Advertiser in June 1774 invited the public, by ticketed entry only, to see the celebrated frog service on display in Greek Street. In Soho, London, before it was packed off to St Petersburg anybody who was anybody duly turned up. According to Hunt, Wedgwood was a defining figure of his age in a similar way to perhaps, Steve Jobs in the 21st century digital era, as both men had interdisciplinary thinking , aesthetic control, production oversight  and a relentless experimental frame of mind.

According William Gladstone, the  great Liberal British prime minister of the 19th century, Wedgwood was “ the greatest man who ever, in any age or country applied himself to the important work of uniting art with industry.”

Under pressure from the City, the company merged with Waterford Crystal and Tony O’ Reilly the Irish tycoon acquired control. Although he  sank a large amounts of his personal fortune into the enterprise, it failed to adapt to changing consumer tastes and to the new markets for luxury products that were developing in Asia. The fatal mistake was to cut costs by shifting production offshore to Indonesia, with damaging consequences for a luxury brand that was in part built on being “Made in England”.

Hunt was the Labour MP for Stoke-on-Trent Central, from 2010-2017, blames the incompetent management for collapse of the company in 2009. The company was not the victim of unexplained market forces, rather, “It was destroyed by a sustained disavowal of Josiah Wedgwood’s precepts for success.”

The company in its 1787 catalogue explained,  “ A competition for cheapness, and not for excellence of workmanship, is the most frequent and certain cause of rapid decay and entire destruction of arts and manufactures.” The failure to recognise the basic truth lead to the disappearance not just Wedgwood but also a large swaths of British manufacturing industry over the past 30 years.”

Is America, a martial state in perpetual conflict, because of 9/11 terror attacks
Sensational win for Emma Raducanu