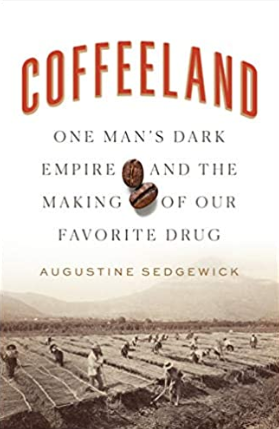 Would you believe coffee, the world’s most popular drug is an indispensable part of daily life for billions of people around the world – one of the most valuable commodities in the history of global capitalism?

In1896 March, an American graduate did a strange contraption – “ glass cage” in fact a copper chamber, seven feet long and four feet wide, with vision panels. The student was to stay inside the contraption for ten days, during which all of his bodily functions, including his precise intake of food, would be carefully monitored.

The calorimeter was a device for measuring energy transfers in what its designer at Wesleyan University considered as a way of finding out what quantity of work and heat can be gotten out of common foods when fed to the human engine”.

According to Sedgewick, a history and American Study teacher, at the University of New York, “The endeavor of turning energy via human labour into profit, is a Victorian concept of the energy of the sun, Apollo powering the industrial revolution.”

Sedgewick tells the hidden and surprising story of how coffee cam to be, tracing its five-hundred-year transformation from a mysterious Muslim ritual into an everyday necessity.

Sun-grown coffee symbolises capitalism as the energy converted into hard cash via labour. Coffee first gathered commercial prominence in Ethiopia in the 15th century – becomes a commodity that binds and separates disparate communities.

Sedgewick reveals what it means to be connected to faraway people and places through the familiar things that make up our day-to-day lives.

As a beverage coffee provides workers with a calorie-free, caffeinated boost. The coffee break words were coined at Los Wigwam Weavers, a Denver men’s tie company – a calculated and originally unpaid 30-minute hiatus in the working day used to administer productivity-enhancing wonder drug.

Mocha was so-called because it was shipped out of the Yemeni port of the same name.

Sedgewick’s story focuses on James Hill, an Englishman who, as an 18-year-old, set sail for El Salvador in the late 1880s to escape the slums of Manchester that were the setting of Engels’ critique of industrial capitalism, The Condition of Working Class in England.

Hill found in El Salvador was a rural idyll that though by no means wealthy, was certainly not poor. The volcanic soil around Santa Ana where Hill established his coffee estate was so rich that no one went hungry.

So he and other coffee dynasties who came to dominate El Salvador’s economy set about their task of turning the landscape into a monoculture whose peasants would have no choice but to work on their estates for a daily wage. The coffee barons consolidated their grip, leaving 80 per cent of El Salvador’s children were malnourished.

The government privatised land in the name of development, like the English enclosures, the scrapping of the commons transformed the peasantry into a rootless labour force working their ass out for 30 cents a day in Hill’s factories in the field”.

He served Tortilla and beans breakfast served at 5:30 am, with a strict cut-off to ensure that work began promptly at 6 am. Labourers who fell short of their tasks were denied rations, ones who performed well given extra as incentives.

Hill’s approach “ the production hunger” or “ the Apollonian engineering” of a coffee factory.  If the sun metaphor seems far-fetched, during the 19th century the idea of work as a conversion of solar energy into tradable goods was so entrenched that factories were commonly referred to as plants.

Coffeeland: One Man’s Dark Empire and the Making of Our Favourite Drug by Augustine Sedgewick, Penguin Press $30, 448 pages.