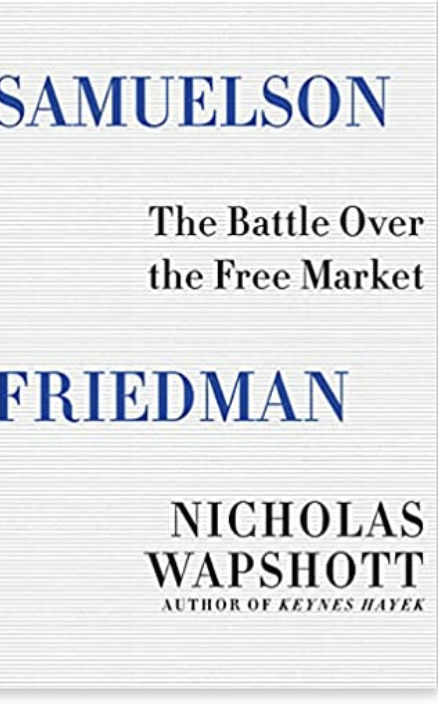 In 1966 two columnists from Newsweek magazine to debate the world of business and economics. Two most influential economist Paul Samuelson was an authority on Keynesian economics which supported the management of the economy along lines prescribed by John Maynard Keynes’s General Theory, and Milton Friedman, little known at that time outside conservative academic circles, championed “monetarism” and insisted the Federal Reserve maintain tight control over the amount of money circulating in the economy.

Journalist Nicholas Wapshott, charts Samuelson and Friedman’s decade-long argument becomes a window through which to view one of the longest periods of economic turmoil in the United States. The soaring economy of the 1950s gave way to decades of declining prosperity and “Stagfiation”, a time when the theory and practice of economics became the preoccupation of politicians and the focus of national debate.

Both were born in Jewish families, who arrived in the US from eastern Europe, their lives ran in parallel, as both attened the same university of Chicago in the 1930s.

In the war years Samuelson established himself at MIT, becoming the author of the dominant textbook and builder of the most important economics department in the world.

If you learned your economics between 1950s and 1980s chances are you are under the influence of Samuelson and his compelling synthesis of Keynesian macroeconomics and market based, neoclassical microeconomics.

Friedman made his base in Chicago from where he mounted his tireless campaign for free market economics.

Wapshott reveals their arguments over the proper scope of government intervention  and the control of inflation echoing down to the present.

The two friendly rivals, Samuelson, an established prominent figure, Friedman, a maverick who argued for floating exchange rather than the fixed system of Bretton Woods.

In 1965 Friedman and his collaborators Anna Schwartz launched a revival of the defunct quantity theory of money with the publication of A Monetary History of the United States 1867-1960.

However, although, Keynesians focused on the ups and downs of investment, Friedman and Schwartz put money at the centre of the economic history. After 1929, the Federal Reserve allowed a rash of bank crises and collapse in the money supply that brought on the great Depression. The trick was to avoid the boom bust cycle altogether by supplying money in a stable and predictable way. Central Bank should not be superheroes but humble servants of a monetary machine.

For Samuelson the quantity theory  was a crude simplification, that in 1961 he turned down a position in the Democratic administration. Friedman by contrast cast his lot with the right wing Barry Goldwater and then with Richard Nixon. He provided advice to the bloodstained military dictatorship of Pinochet in Chile and opposed sanctions on white controlled Rhodesia after unilateral declaration of independence.

When he won the Nobel Prize in 1976,  the celebration in Stockholm was besieged by protesters.

When Paul Volcker’s interest rate hike in 1979 put a stop to inflation in the US, Friedman disowned the experiment, saying the shock therapy Volcker administered was not monetarism. The Margaret Thatcher government in the UK experimented with monetary targets, but soon abandoned them. Tax cutting and winning election was too important. In 1989, in the US, Clinton governed with a team full of MIT alums, but it was Samuelson’s  followers who gutted the welfare state and pushed through a budget surplus. The Republican’s by contrast abandoned any pretence at fiscal vigour. Alan Greenspan a disciple of the libertarian Ayn Rand, was endlessly, tinkering adjusting interest rates in homeopathic doses as chair of Federal Reserve under President s Regan, Clinton and two Bushes.

In 2008 Bernanke and his colleagues let Lehman Brothers fall, resulting the world on the brink of the greatest financial crisis since the 1930s. Only thereafter, Bernanke return to the monetarist script and flush the system with cash. Friedman died in 2006. But Schwartz denounced Bernanke’s ad hocery.

Friedman and Samuelson and their disciples underestimated the huge instability of the capitalist economy, but overestimated the ability of technocrats to agree on the best response and willingness of divided democratic politics to implement them.