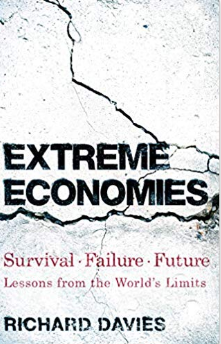 Richard Davies in his latest book “Extreme Economies”  gives us a global tour of disasters and recovery and studies the irrepressible markets inside the Louisiana State Penitentiary where there’s the mackerel economy –tinned mackerel being light, standardized and durable, and makes a good currency and the dot economy. In the outside world, green dot pre-paid plastic cards are as good as cash in most stores, can be loaded with value by purchasing a “MoneyPak”, which is just a 14-digit code. The dots. Inside the prison, prisoners can bribe guards or pay each other large sums untraceable all they need is for an associate to pass them the dots.

What can one learn from a refugee camp or a tsunami disaster zone about the way the economics work?

In the 17th century, Hugh Montgomery, a boy fell from his horse and lost part of his rib cage doctors replaced it with a metal plate and he survived –with a living heart that could be inspected by the pioneering doctor William Harvey.  Phineas Gage survived a metal spike through his head in 1848, and the changes in his character inspired a fresh understanding of how the brain works. By studying the people who have suffered catastrophic injuries and survived Richard Davies asks if a similar trick works for economies that are usually resilient such as Aceh after the dreadful Tsunami of 2004. After the Aceh Tsunami disaster, few survivors were able to sell their gold jewellery to local gold traders Harun and Sofi who could access the international market price. The gold was always intended as saving for hard times and Davies tells us it worked as intended in “contrast with the western financial system. Yet while gold bracelets worked, bank accounts could have worked better as it took three months for gold traders to be up and running again.

Davies praises the entrepreneurial spirits of Syrian refugees of the Zaatari camp in Jordan, in 2016, the ratio of new to established firms was world-beating and takes us inside and introduces us to the residents and deftly sketches both their many struggles and some of the pleasures of life in the camp.

Leading economist Richard gives us a snapshot from disaster zones and displaced societies to failed states and hidden rainforest communities the lives of people who inhabit these little known places tend to be ignored by economists and policymakers. He also offers a glimpse of the forces that underlie human resilience help markets to function and cause them to fail and will come to shape our collective future.

While trekking with Punjabi immigrants through the lawless Panamanian jungle or revealing the clever trick Syrians use to underpin the trade in the world’s most entrepreneurial refugee camp.