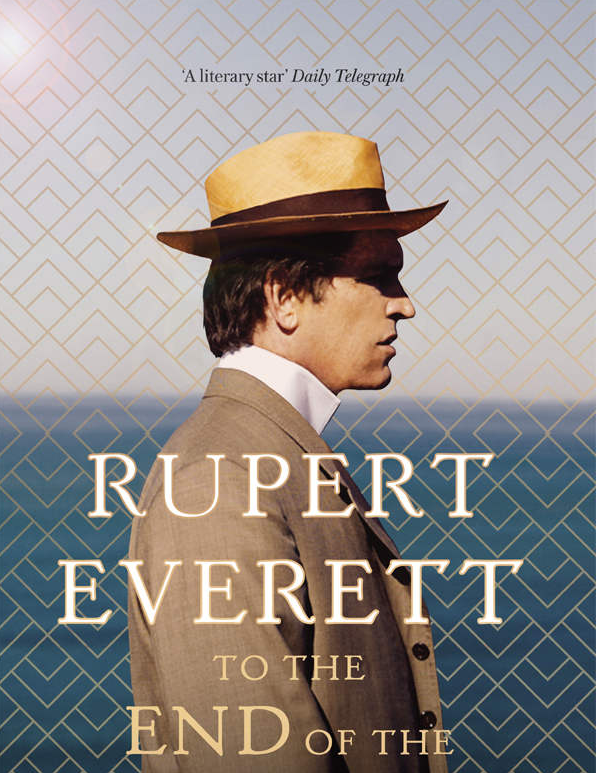 Ghosts don’t realise they’re dead and wander around screaming because no one is paying them attention. You howl around the corridors of power while the elite march straight through.

Rupert Everett tells the story of a soulful and thought-provoking autobiography from one of our best-loved and most talented actors and writer and how he set out to make a film of Oscar Wilde’s last days and that ten-year quest almost destroyed him. Travelling across Europe for the film, he weaves an extraordinary tales from his past, remembering wild times freak encounters and lost friends. He also highlights doomed Aunt Peta, who introduces Rupert (age three) to the joys of make-up in 90s Paris, his great friend Lychee burns bright, and is gone.

In 2009, the actor starred in a documentary about Lord Byron, master of dramatic farewells. In 2018, he wrote, directed, and starred in The Happy Prince, a well-received film that follows a disgraced Oscar Wilde into exile in France where Everett finds his playwright’s humiliation by a spitting, jeering crowd.

Everett likes playing Byron. He “is” Wilde, as he relates at the start of his immaculately stylish and funny anecdotes, especially written with Everett himself in mind, was never going to be yielded to the late, great actor Philip Seymour Hoffman.

Everett’s story leads him into some of the loveliest hotels in Europe – where lapped in luxury, he earnestly identifies with the impoverished novelist Jean Rhys.

To the End of the World, in shamelessly irrelevant detail, the story of Everett’s cherished and extraordinary friend Lychee, a transgender “ courtesan” from Vietnam who lived in a welter of 500 franc notes. At the time of her murder, she was wearing sable fur.

The façade is brilliant try finding the man it shields “Like a shark, I am at my best on the move”.

No train journey is complete without the picnic from Fauchon Paris’s fanciest delicatessen.

Racy and naughty Rupert as seen through the raised lorgnette of an aging Wilde.

To the End of the World offers a unique insight into the snakes and ladders of filmmaking.

To The End of the World: Travels with Oscar Wilde by Rupert Everett, Little, Brown £20, 342 pages.